"Water is a great example of a dedicated post-2015 goal that can combine basic human needs and concerns about environmental sustainability, by including sanitation and waste water management in one goal. We need to deal with global environmental problems at the same time as we work to improve the need of the poorest and most vulnarable people", said Dutch minister Lillian Ploumen of foreign trade and development cooperation at the 68th General Assembly of the United Nations in New York on 25 September.

"We need specific and measurable goals. Because what gets counted, gets done", said Ploumen on behalf of the Dutch government.

Since the celebration of World Water Day 2013 in The Hague on 22 March 2013, the Dutch government officially supports the proposal of the UN Secretary-General’s Advisory Board on Water and Sanitation (UNSGAB) for a stand-alone water goal with components on access to safe water and sanitation, waste water management and water resources management.

Ploumen emphasized that eradication of poverty by 2030 should be the main goal. "But fighting poverty and sustainable development are two side of the same coin"

New set of goals in 2015
In the outcome document of this side event adopted by Member States, world leaders renewed their commitment to meet the MDG’s targets and agreed to hold a high-level Summit in September 2015 to adopt a new set of goals.

The general assembly has to decide on the next steps for the post-2015 goals that will succeed the current UN millennium goals. 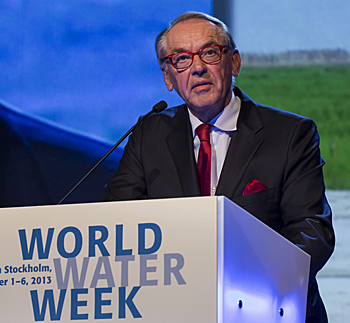 Sanitation is the most legging of all current Millennium Development Goals, reminded UN's deputy secretary-general Jan Eliasson his audience during the opening ceremony of the Stockholm Water Week 2013 on 2 September.

From Stockholm to Budapest
Early September the global water sector discussed the post-2015 goal on water during the Stockholm Water Week. Not surprisingly the water sector favoured the proposal for a stand-alone sustainable development goal.

However most global water issues are interlinked with other global issues such a food and energy production, health and education.

From this perspective it is conceivable to develop one overall sustainable development goal for all global resources.

The outcome of the UN General Assembly will be discussed at the Budapest Water Summit that takes place from 8 - 11 October. This summit will highlight the technological, financial, governance and capacity aspects of a water-related SDG.

The outcome document – the Budapest Recommendation on Water and Sanitation – will formulate suggestions to the attention of the UN.

Video recording of the special seminar (3 hrs 23 min) at the Stockholm Water Week on 1 September on 'Triggering action on water through the Post-2015 agenda'. Chair of UN Water, Michael Jarraud, starts the seminar explaining the state of the global discussion.