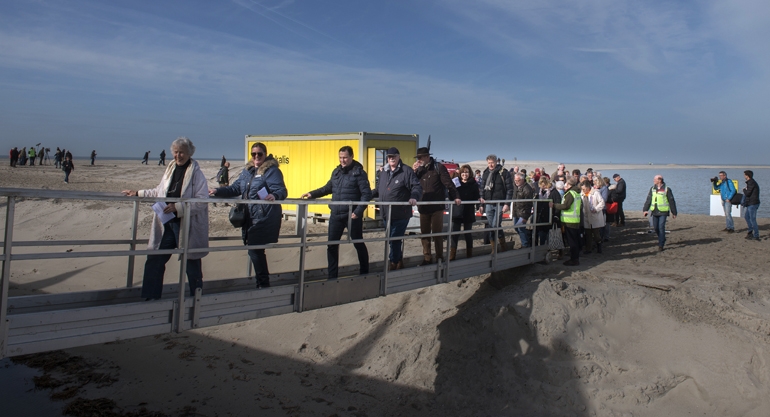 Probably the most remarkable polling station for the elections of a new Dutch parliament was on the nature island Marker Wadden. The construction of the island was completed only last year and officially it is still closed to the public. However, on the occasion of the Dutch elections a ferry boat took people to the island where they could vote for the candidate of their choice. 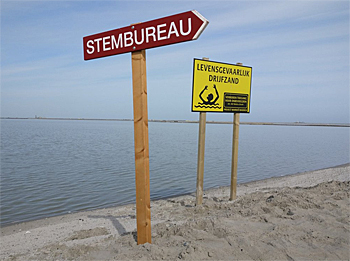 A remarkable combination of signs. Red sign: pointing in the direction of the polling station. Yellow sign: warning for quick sand.

Beautiful spring weather
More than 1,300 voters took the opportunity to queue up for the ferry boat and the polling station on the remote and sandy island. No doubt the beautiful spring weather encouraged them to take the boat and combine the voting with a visit to the latest showpiece of Dutch civil engineering.

The ferry boat took an hour. Voting and wander around the island, took most visitors half a day.

The first voters to be brought in, were the local officials. A group of young people who voted for the first time took a rib speed boat.

Eco-engineering
The island Marker Wadden is an example of eco-engineering, in the Netherlands known as Building with Nature. Contractor Boskalis only constructed some beaches, sand banks and low dunes, linked by a rock dam.

These constructions have been shaped in such a way that fine sediment settles in shallow areas and creeks, thus creating natural wetlands. 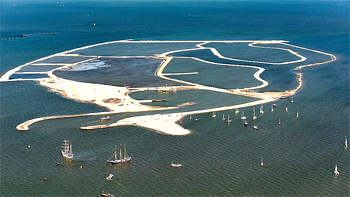 Construction of the first island was completed in September last year. Because of its special shape the construction will trap fine sediment and gradually turn into a wetland of marshes and mud plains.

Poor water quality
The island is situated in Lake IJssel, the largest fresh water basin in Europe. In contrast to other large, shallow European lakes, the lake has a poorly developed littoral zone due to its non-natural origin and due to the continuous mixing and high turbidity.

The turbidity hampers light penetration through water and the overall ecological development.

Archipelago of five islands
Dutch Society for the Preservation of Nature (Natuurmonumenten), together with the national department of public works Rijkswaterstaat and a consortium (Boskalis, Royal Haskoning DHV, Deltares and Alterra) committed themselves to bringing life back to the lake.

By removing the mud layer from the lake’s bed and re-using the soft sediment to build wetlands, they are expecting to transform a part of the lake into the new nature reserve Marker Wadden.

The goal is to create an archipelago of five islands by 2020, covering 1000 ha of land, marshes and mud plains.

Recently the construction started on the other four islands.