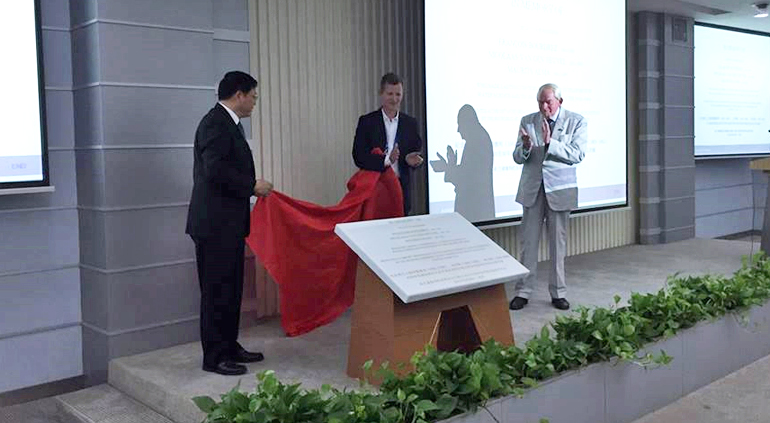 The Hydraulic Research Institute in Nanjing, China celebrates its 80th anniversary and on occasion of the visit by a delegation of the Dutch water sector, a commemoration took place of three Dutch engineers for their lasting contribution to the development of water conservancy in China in the 1930s and 1940s.

On 28 May a grandson of one of the engineers, Francois Bourdrez, unveiled a plaque to commemorate the efforts by these Dutch pioneers to harness the big Chinese rivers and to the setup of the specialized hydraulic research institute in China.

The commemoration took place in the presence of professor Jianyun Zhang, president of the Nanjing Hydraulic Research Institute, secretary general Jan Hendrik Dronkers of the Dutch national Public Works and Water Management (Rijkswaterstaat) and Counsellor for infrastructure and Environment Anne te Velde of the Dutch embassy in China. 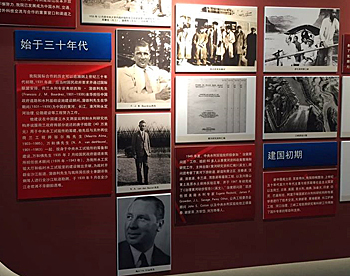 Historical display at the NHRI centre with photos of the three Dutch pioneers.

Historical contribution to Chinese water conservancy
The history of Dutch relation with the Nanjing Hydraulic Research Institute dates back to the early 1930s. At the end of 1931 when, at the request of the then Chinese government, Francois Bourdrez (1901-1939) came to China to work as the consultant for road and water infrastructure construction for the Chinese government.

During his stay in China, Bourdrez worked on harnessing of the Yellow River, the Yangtze River, the Huaihe River and the Yongding River, and for road construction.

He made proposals to establish hydrological stations and networks, and to set up a specialized hydraulic research institute in China. He persuaded the relevant government agencies to use part of a Dutch fund for the establishment of the Central Hydraulic Research Institute in Nanjing. 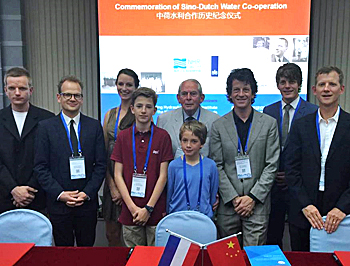 Eight members of Bourdrez family at the commemoration.

They contributed to the construction of the large hydraulic experiment hall and the hydraulic laboratory that are still part of the Central University in Nanjing.

Drowned on the Jinsha river
During the war against Japanese invaders the Chinese government, requested Bourdrez and his Chinese colleague Zhang Jiong, an engineer of the institute, to boat on the Jinsha river and explore navigable waterways.

Unfortunately, the boat was wrecked on May 10, 1939, and as a result, Bourdrez and Zhang Jiong died at their posts.

(all photos: Facebook Consulate General of the Netherlands in Shanghai)