The Nereda installation at wwtp Epe, the Netherlands, uses 21,2 kWh/p.e.150 eliminated.year, whereas an average conventional wwtp in the Netherlands uses 37,5 kWh.

For fully loaded conditions a potential energy consumption as low as 16,3 kWh has been calculated.

This is one of the important outcomes of a study, conducted by the water research institute Stowa, on the first full scale Nereda  installation (53.000 p.e., 1500 m3/d)  that is in full operation since January 2012. 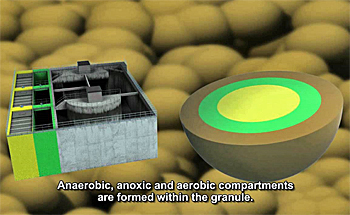 As a result Nereda does not require large settlement tanks. Not only reduces this the footprint of the installation, it also eliminates a pumping station for feeding back the sludge to the aeration tank. Other energy saving elements are the blowers (52%) and the mechanical sludge thickening (12%).

The study showed also that effluent complies with the very stringent nitrogen and phosphorous requirements of 5 mgN/l and 0,3 mgP/l. 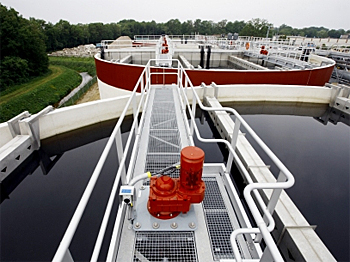 Further improvements
"We are very pleased with this result", says Bert van Vreeswijk of the water board Waterschap Vallei en Veluwe who operates wwtp Epe. "We did not know exactly what to expect when we started. The installation has proved to be much better for the environment and requires less energy. This makes a big difference in our operational costs."

New Nereda plants
Since the commissioning of the Nereda plant at wwtp Epe in 2012, two other Dutch water boards selected the Nereda technology. Both wwtp Gamerswolde and wwtp Vroomshoop operate a  Nereda plant.

Currently there are 10 plants in operation and more than 20 projects under development and construction throughout the world including in the Netherlands, Portugal, South Africa, Brazil and Poland.

This news item is based on a press release on the website of water board Waterschap Vallei en Veluwe (in Dutch only) and on the English summary of Stowa report 2013-29 Nereda praktijkonderzoeken 2010-2012.