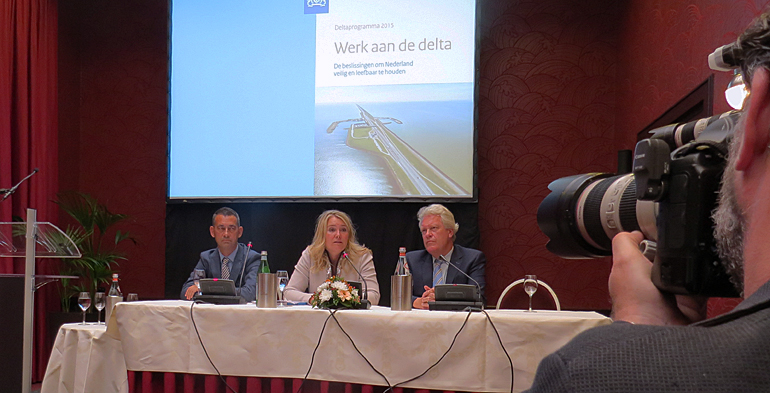 By 2050 all Dutch people must be protected against floods at a risk level of death of 1:100,000 per year. These new risk-based standards imply no more fatalities due to flooding than 1 in 100,000 per year. Specific key economic areas, including power plants and gas supply infrastructure, will receive a higher protection level.

The risk-based approach is one of the five key proposals in the fifth Delta programma that was presented by Delta commissioner Wim Kuijken (right) to minister of Infrastructure and the Environment, Melanie Schultz van Haegen (middle) on 16 September.

The fifth Delta Programme contains decisions and strategies to improve the national flood safety and fresh water supply. Estimated costs are 20 billion euros. The Dutch government has already earmarked 1 billion euro per year till 2028 through a so-called Delta Fund.

The proposed flood safety standards are scheduled to be embedded in law by 2017 and all levees must meet these standards in 2050. 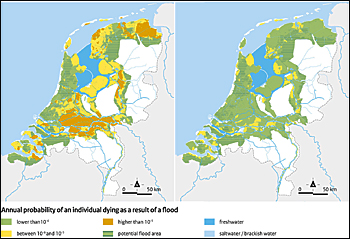 Based on the currently planned flood safety measures large flood prone areas (left map, in brown: fatality risk exceeding 1:100,000) in the Netherlands will not meet the new risk-based standard by 2020. Additional measures are needed for the full implementation of standard by 2050 (right map, in yellow: risk remaining between 1:10,000 and 1:100,000).

From water levels to potential risks
The current safety standards for water defences in the Netherlands anticipate on extreme high water levels due to extreme weather events occurring once in 1,250 up to 10,000 years.

The different protection levels are based on the size of the population and the economic importance. For regions with fewer inhabitants and of less economic value, lower standards were set at the time.

However, this assumption is now no longer considered applicable. The probability of flooding due to high water levels is now regarded as small compared with the risk due to other flood failure mechanisms, such a piping (underseepage erosion) that can undermine levees.

Besides the Dutch government will also introduce a three level approach on flood risk reduction. Preparedness with strong dikes will remain the most important element, but additionally water-robust spatial planning and evacuation schemes can lower the death toll in case of levee failures.

Second Delta plan
Minister Schultz: "Today we begin a new chapter in our centuries-old relationship with water. Almost 60 years ago, the first Delta Plan resulted in the construction of the Delta Works which have since provided decades of protection. Today we have a new Delta Plan for the decades ahead. Many more people now live in low-lying areas. Our economic activities there have grown significantly. And, due to climate change, the sea level is rising and our rivers have more water. It is therefore time for a new Delta Plan that provides for additional protection."

Concrete measures
Mr Kuijken: "I am proud that over the past years, as Delta Commissioner, I was able to prepare and flesh out these decisions and strategies, and make a well-substantiated proposal for decisions with structuring effects on behalf of the authorities involved and many civil society organisations. I am pleased by the Cabinet’s positive reaction. The Delta Act of 2012 has been an enormous help. In the years ahead, will do my utmost to make progress on these decisions and convert them into concrete measures. This means that we will have to continue to work hard for more than 30 years, and spend some 20 billion euros from the Delta Fund." 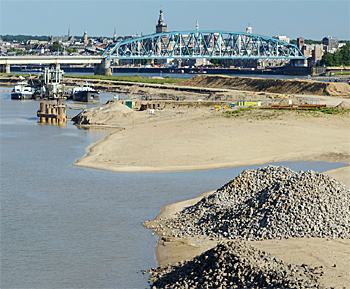 The initial climate adaptation measures will concentrate on the reinforcement of the levees
along large rivers.

Delta Decisions
The Delta Programme 2015 contains the national Delta Decisions and concrete preferred strategies for each region. Together, they constitute the roadmap for our work on the delta up until 2050. The decisions involve:

● Water safety: better flood protection with new safety standards for our water defences. Heavy investments will be made in the Rivers Region, in particular. The Delta Programme 2015 provides new standards for over 200 dike sections. The new standards will be embedded in law.

● Freshwater supply: arming of the freshwater supply against salinisation and longer dry spells. National and local authorities will make agreements to prevent shortages of fresh water and drinking water from disrupting the agricultural sector, the natural environment, public utilities and the economy, and to ensure that fresh water is used more efficiently. In the years ahead, the national government and the region will invest more than 450 million euros in the freshwater supply.

● Spatial adaptation: national and local authorities will make agreements on the water-robust design of towns and villages, and on giving water more room where necessary. This can be done, for instance, by collecting water in water squares, building floating houses, placing more greenery or relocating vital infrastructure. The aim is that the whole of the Netherlands will be designed in a climate-proof way by 2050.

● Rhine-Meuse delta: the area in which the Rhine and Meuse flow into the North Sea, with the port of Rotterdam and many surrounding towns, will be better protected. This is one of the most vulnerable places in the Netherlands. The dikes will strengthened and the spatial design of the area will be made more water-robust, the capacity of the rivers can be increased and the effectiveness of the Maeslant barrier - the area’s major defence against the sea - can be improved.

● Strategic decision on sand: the current coastline will be maintained by using beach nourishment.

This news item is based on the press release published on the website of the Delta Commissioner.