All parties involved in the design of the square - constructors, neighbours, church-goers and students from the surrounding schools - joined in the festive opening by local administrator Nils Berndsen, national deltacommisioner Wim Kuijken and vice-mayor Alexandra van Huffelen.

The city square is unique for it size as it can retain 1,700 m3 rain water. More over the square is also unique in its design process.

In three workshops the future users of the square conceived ideas with the designers of De Urbanisten and the local council, to able them to use the square for sports, theatre and relaxation.

Dynamic place for young people
As potential users of the square they discussed the desired atmospheres and how the storm water could influence the square. All agreed the water square had to be excitingly visible while running over the square.

The enthusiasm of the participants enabled the city and the designers to combine leisure and storm water storage in an attractive square. 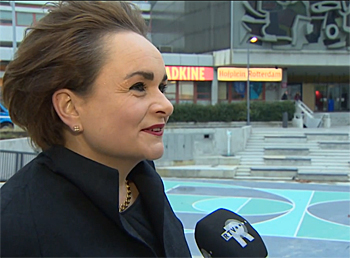 Two undeep and one deep basin
Three basins collect rain water: two undeep basins for the immediate surroundings will receive water whenever it rains, one deeper basin receives water only when it consistently keeps raining. Here the water is collected from the larger area around the square.

A crucial sponge
"We're really planning ahead", explained Alexandra van Huffelen (photo left), Rotterdam's vice mayor. "As a low-lying delta city with some 600.000 people we cannot flush a sudden storm water away. Therefore the city embarked on a climate adaptation strategy that turns every conceivable area into water storage."

Van Huffelen continued: "The Dutch have lived below the sea level for centuries and are used to dykes and barriers. But today we're experiencing heavier and more unpredictable rainfalls, so behind the barriers we're turning the city into a sponge."

Four types of leisure at the waster square from top to bottom: during the dry period, wet (30x/year), extreme wet (1x/year) and winter.

International example of climate adaptation
The opening of the water square Benthemplein marks the ambition of the City of Rotterdam and Schieland and Krimpenerwaard District Water Board to address water and climate issues.

The major goal of this initiative is to make the city fully climate proof in 2025.

Rotterdam strives to combine every possible aspect: a nice, attractive city to live and work, water safety and business opportunities. By using innovative concepts as green roof tops and water squares, the city has become one of the international examples. Dozens of international delegations visit the city each year.

The innovative approach has led to commercial projects for Dutch companies in cities such as Ho Chi Minh City (Vietnam) and New Orleans (USA).

This news item was originally published on the websites of Rotterdam Climate Initiative and De Urbanisten.

Schieland and Krimpenerwaard District Water Board
Rotterdam, the Netherlands
+31 10 453 7200
www.schielandendekrimpenerwaard.nl