The Urban Water Plan was designed over the last two years by a team of local, national, and Dutch experts led by New Orleans firm Waggonner & Ball Architects.

Implementation of the Urban Water Plan puts forth seven demonstration projects and will have approximately $22 billion in economic benefits to the region over fifty years.

A better place to live
"The plan serves a symbiotic dual purpose, simultaneously preserving the value of businesses and communities", said Michael Hecht, President and CEO of Greater New Orleans, Inc on occassion of the release.

"Implementation of the Urban Water Plan will make Greater New Orleans a better place to live and work, while building our new brand as national 'water experts' – something clearly to be in demand in a world of increasing weather volatility."

Smart, attractive and sustainable investments
"After working together with a talented team for several years, we are happy to release the Urban Water Plan", said David Waggonner, Principal at Waggonner and Ball Architects.

"We’ve done the math, assessed the problems and drawn opportunities for smart, attractive, sustainable investments.  It’s time for Greater New Orleans to move forward as a leading city of the 21st century." 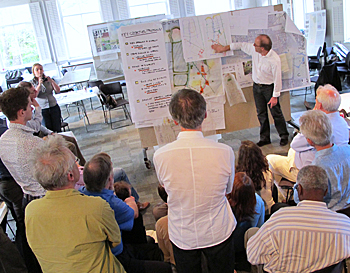 Project team at work during Dutch Dialogue 3
in Juli 2012.

Water and landscape management
"Dutch experts came to New Orleans to see what their expertise might contribute to New Orleans’ future", said Dale Morris, Senior Economist at the Royal Netherlands Embassy.  "They immediately saw the need for a more comprehensive approach to water and landscape management. The State of Louisiana and Greater New Orleans seized this opportunity and enabled David Waggonner to assemble a hand-picked, Dutch-US team that has made a huge difference for New Orleans.  The Dutch are proud to be associated with helping to secure the future of one of America’s greatest cities."

International model for resiliency
"As we continue to rebuild our city, innovative water management strategies, including the Greater New Orleans Urban Water Plan, will be at the forefront", said New Orleans Mayor Mitch Landrieu. "We have an opportunity to create a template for water management that can serve as an international model for resiliency."

The full plan can be found at www.livingwithwater.com.

This news item was originally published on the website of Greater New Orleans, Inc.

TEDx-presentation by David Waggonner in New Orleans in August 2010:
“Over the course of three Dutch Dialogue conferences in the years after Hurricane Katrina, David has articulated a new vision of New Orleans as a delta city living with — rather than against — water to address long-term development of urban character and form.”