Today, August 6th, the New Suez Canal is officially opened. Dutch minister of Infrastructure and Environment Mrs. Melanie Schultz van Haegen is heading a diverse, senior Dutch delegation to attend the inauguration of the New Suez Canal. The Netherlands is a proud contributor to the project with two Dutch dredging companies, Boskalis and Van Oord, working on site.

The Dutch delegation encompasses senior officials from the Ministry of Foreign Affairs and the Ministry of Infrastructure and Environment. Ambassador of the Netherlands to Egypt Mr. Gerard Steeghs also participates in the event.

Boskalis (as project leader) and Van Oord were part of a consortium that included NMDC (Abu Dhabi) and Jan de Nul (Belgium). The consortium was tasked with dredging a 35 km long New Suez Canal that runs parallel to the existing canal; dredging a record breaking 200 million m3 of sand, clay and rock in less than 9 months. In addition two Service Channels and two Cross Channels were dredged, which connect the existing and the New Suez Canal.

200 million m3 of sand dredged in less than 9 months
On 5 August 2014 the starting signal was given for one of the largest and iconic maritime projects of our time; the second Suez Canal in Egypt. Records have been broken, ships have been mobilised from all over the globe and the work went on 24 hours a day.

Two-way container ship traffic was impossible on parts of the Suez Canal. That’s why a second canal was vital, according to the Suez Canal Authority. Due to the expansion of the Suez Canal, which provides an essential shipping link between Europe and Asia, the capacity is expected to be doubled from 49 to 97 ships a day. The contract for this immense project was signed in October 2014 by the Challenge Consortium. 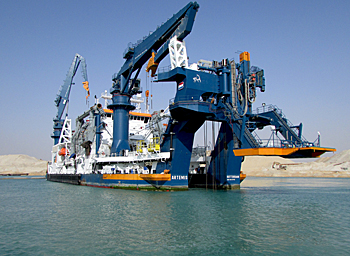 A few kilometres from the existing canal, between enormous mountains of sand, a stretch of blue water is being created. This section goes straight through the Sinai desert, is parallel to the current canal and will be about 35 km long. In its totality the second Suez Canal will measure 72 km long, 200 m wide and 24 m deep. With an effective build schedule of just ten months, construction of the second Suez Canal was a challenge.

More than 1,800 people from 45 countries worked on the project. 21 cutter suction dredgers were deployed, including some of the largest and most powerful dredgers in the world, such as Van Oord’s latest addition to its fleet; cutter suction dredger Artemis. The Artemis has more than 24,000 kW of installed power on board.

Milestones
Although the dredging contract itself is traditional, the execution period of less than a year is exceptional. Several milestones were achieved during execution. The most spectacular of which was that, at their peak, the dredgers were moving a total of 1.4 million m3 of material per day and 200 million m3 in total in just nine months. Another milestone achieved during the project was that it involved the largest number of dredgers ever deployed on a single project – 28 units and 40 pieces of auxiliary equipment.