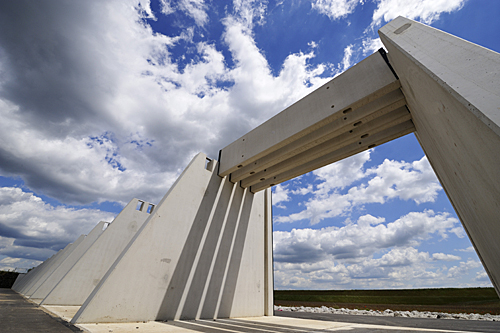 The Dutch national water authority Rijkswaterstaat has officially commissioned an adjustable weir in a by-pass of the river Rhine near the city of Arnhem on January 30th.

The new 'tap' is unique in its kind in the Netherlands. It is a simple civil construction consisting of a 150 m long wall across the flood plain of the river that can be opened by removing concrete elements in case of extreme high water.

Depending on how many elements are removed, up to a maximum of 175 m3/s can be diverted extra into the IJssel. 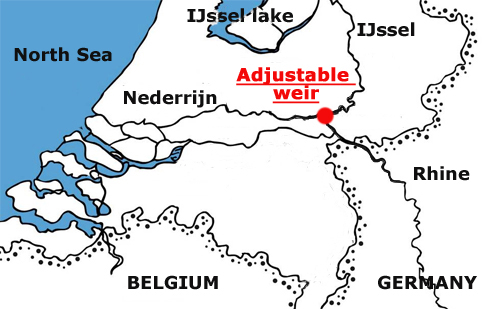 Dike moved inland
On the location of the diversion, the total river capacity has been increased by widening the flood plain. A new dike has been constructed 250 m inland and in this newly created flood plain a by-pass has been excavated. The 'tap' is situated in this by-pass and regulates the amount of highwater to pass through.

In case of a combination of extreme highwater coming down the Rhine and springtide on the North Sea, the 'tap' can play a crucial factor in preventing downstream floods. By using the 'tap' the water authorities can direct more highwater northwards to the IJssel lake. As a result the flood risks around cities as Rotterdam can be reduced.

First out of series of 30 river projects
The commissioning of the diversion work is the first completed large project in a series to 30 projects of the 2.3 billion euro Room for the river programme (Ruimte voor de rivier) that is to increase the capacity of the Rhine from the German border to the North Sea/IJssel lake from 15.000 to 16.000 m3/s.

All 30 projects have to be ready by 2015 and include the lowering of the floodplain at various locations, removal of obstacles, deepening the summer bed, creation of more temporary water storage capacity, relocation of dikes inland, lowering the groynes. 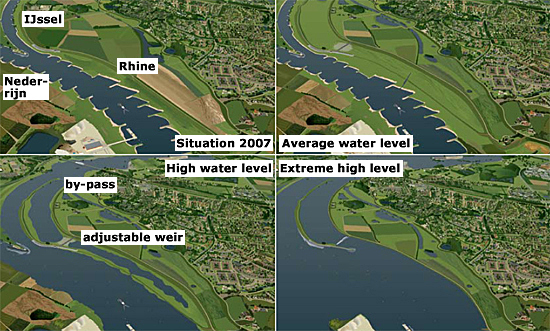 Unique construction
"The tap is unique in the Netherlands", said Ingwer de Boer, programme director of the Room for the river project. "By moving the dike inland, in combination with the tap, the highwater can be diverted with great accuracy".

On the occasion of the commission, De Boer officially handed over the new dike, the by-pass and the tap to the local water authorities for the day-to-day management.

De Boer also mentioned the use of a new technique (mixed-in-pace) for construction of the dike. For the first time a 9 m deep bentonite barrier wall has been placed underneath a dike to prevent seepage undermining its strength . "The bentonite barrier in the underground, made it possible to reduce the dike width and saved us 3 million euro."

The reconstruction of the river diversion cost 50 million euro, including 2 million for the tap.

Fine tuning up to 20 m3/s
The tap consists of 30 gates with the possibility to close these gates by piling up four elements. "In case of the flood warning it is possible to regulate the capacity of the by-pass with a precision of 20 m3/s", tells Peter van de Kreeke of the consultancy firm Royal Haskoning, responsible for the design.

"Based on measuring from the past and the prediction of water levels, we have been able to model the situation of the river diversion and design the whole reconstruction", says Van de Kreeke.

"For the modeling we had to extrapolate the real measuring as a situation of highwater in the Rhine of 16.000 m3/s has never occurred yet."

Van de Kreeke adds that the new tap not only has an important effect on the downstream situation. "The by-pass can also influence another important upstream diversion in the Rhine. By modeling the high water for the whole Rhine system, we can predict the effects of opening or closure of the by-pass both upstream and downstream."

"To protect cities as Hanoi, New Orleans and Winnipeg large spill ways and by-passes have been constructed. Activation of these spill ways give more room to a river, lowering the water levels."

"Yet, the activiation of an adjustable weir in a by-pass is different. It gives the water authorities the possiblity to direct more or less water into one of rivers at a diversion", marks Mosselman.

Safety of four millions downstream
To emphasize the importance of the weir, Theo van de Gazelle, vice-director of Rijkswaterstaat, memorized the new policy for flood controle in the Netherlands. "After the almost flooding of the Rhine in 1993 and 1995, we realized we could not continue raising our dikes forever and adopted a new policy to ensure the safety of four million people. We decided to give more space for our larges rivers to flow more safely from our borders to the sea.”

Lower water levels
“In the past we canalized our rivers between high dikes. In the future we expect more heavy rainfall in the Rhine catchment area and we have to prepare for more highwater. Instead of raising our dikes endlessly, we now focus on meassures to lower the water levels wherever possible. This is in essence the programme Room for the river", explains Van de Gazelle.