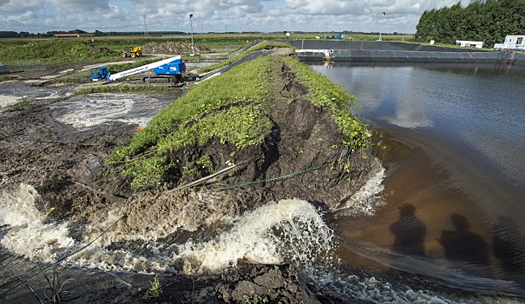 Advanced sensor systems within test dikes on the IJkdijk location near Groningen, the Netherlands, proved successful, signaling an imminent failure. Two experiments recent were conducted in special constructed basins. The basins were filled with water and its dikes finally gave way on August 26 and 27.

A third test consisted of a dike with containers on top. By filling the container slowly with water the pressure increased. The dike sheared and finally breached by a slide on September 8.

Validation of various new sensor systems
The three pilots were part of the All-in-One Sensor Validation Test to examine the value of various new sensor systems to warn for a possible breakthrough. The tested systems used sensors to determine a sudden change in:
- water pressure in the pores
- temperature in the soil (including external infrared cameras)
- movement of the soil
The data produced by the sensors was collected and made visible in dashboards on monitors. 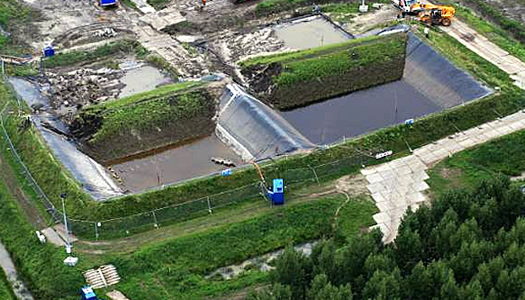 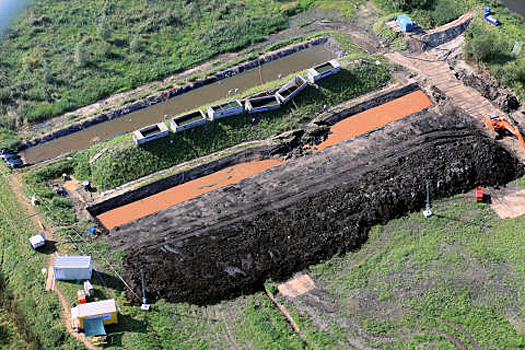 Dike breached by a slide 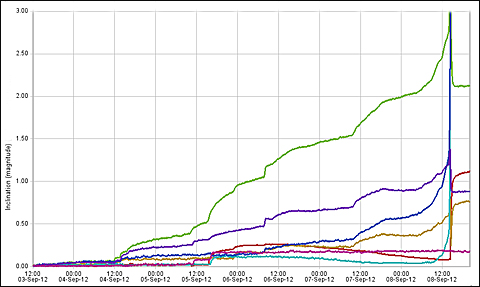 GeoBeads sensors used by AlertSolution started to register lateral earth movements in the test dike four days ahead of the actual breach.

Evaluation of the predicting value
The time and cause of the dike breaches was not known beforehand. Ultimately the dikes collapsed as a result of the failure mechanism ‘internal overtopping’, where water forces its way into the body of the dike over the clay core. The dike softens and then shifts at the dike toe (at the bottom). The dike collapses at the top and the water flows over it.

An independent commission will view how reliable and valuable the various sensor systems have been in predicting the time, the type of failure mechanism and/or the point of collapse of the test dikes. A final report is expected early 2013.

Participants specialized in sensor technology
Various participants contributed to test the predictive value of their sensors (sensor parties). There are also four parties that concentrated specifically on collecting and processing the data yielded by the sensors (data parties).

The search institute Deltares coordinated the tests.
(read more: Deltares to supervise all in one sensor experiment in full scale test embankment IJkdijk – May 21, 2012)

Previous experiments at the IJkdijk location
The first major experiment with the IJkdijk was a macro stability test in 2008 showing that 42 hours prior to the actual breach the deformation had started precisely at the position where the dike finally collapsed. Sensor equipment had detected the premature subsidence in the dike.

Another experiment was a unique large scale piping test in 2009 that demonstrated for the first time the occurrence of piping and the actual collapse of a dike. The piping experiment showed that a drainage pipe in the right place can prevent piping.

The most recent All-in-one sensor test is the last major experiment at the IJkdijk location. The IJkdijk programme for advanced sensor technology for dike monitoring will end late 2014.

Spectacular live images of the breach and a final comment by Wouter Zomer, managing director of IJkdijk Foundation - Dutch spoken)