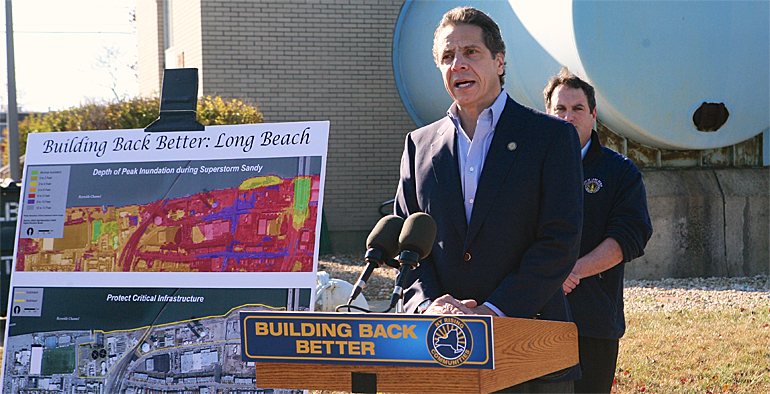 The district was flooded in the storm surge brought on by superstorm Sandy, which damaged the city’s key infrastructure facilities and resulted in the loss of  essential services to the community.

New York State has selected the standby Dutchdam flood barrier that is folded in a trench on location and can be deployed in the event of a major storm.

This adjustable seawall is "one of the most exciting available options for what we're dealing with," Cuomo said. When not in use, the Dutchdam is at ground level and doesn't obstruct views. But when a storm is coming, it can be raised to protect against sea surges and flooding.

Better protected for next storm
"Superstorm Sandy caused significant damage to Long Beach just over one year ago, but since then we have made substantial progress in making the area more resilient to the effects of major storms, especially through the hard work of the Long Beach NY Rising Committee", Governor Cuomo said.

"The industrial district provides critically important services to the residents and businesses of Long Beach, and by supporting this project we are ensuring that the city can better protect itself and its infrastructure from the next major storm. These bulkheads and flood barriers are another example of how New York State is helping local communities build back better and stronger." 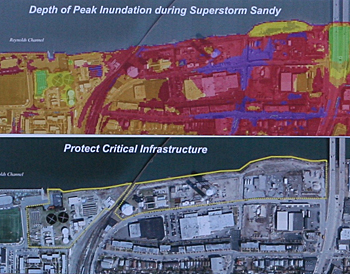 Extension of bulkhead and standby flood barrier
The project will add approximately 2,300 feet of bulkheading material to an elevation of 11 feet along the bayside of the district. This provides an extension of current bulkheads located to the east and west of the industrial district.

Additionally, this project will provide roughly 4,400 feet of the standby flood barrier Dutchdam that can be deployed to a minimum height of 11 feet in the event of a major storm. The Dutchdam will be placed along the north side of Park Place to Long Beach Boulevard and West Pine Street to the eastern edge of the wastewater treatment plant, effectively surrounding the eastern and western perimeters of the properties to meet the bulkheads.

Essential infrastructure damaged by superstorm Sandy
The Long Beach industrial district is located between Park Place and the Bay, and houses essential infrastructure facilities that include a water treatment plant and storage tower, wastewater treatment plant, electrical substations, and major gas pipeline. All of these facilities were damaged by superstorm Sandy, and had to be shut down for weeks afterwards for emergency repairs.

About Dutchdam
The Dutchdam is a folding flood defence, which is produced with its own housing construction and in which the complete flood defence system is accommodated in a folded position.

The complete construction can be integrated into quay walls or defence walls.

The strength and stability are the consequence of the design principle of the Dutchdam. Because there are no nuts and bolts there are no weak spots. Erecting the Dutchdam, even in unfavourable weather conditions, is a simple task. The coupling together of the parts of the Dutchdam works in one way only. The Dutchdam has storm-proof safeguards and has a high load-bearing capacity.

This news item was originally published on the website of New York State and Long Island Newsday.