In September, the Nexus center network opened its first two new water kiosks in Nepal, each producing 9,000 liter of water for 4,000 beneficiaries. One centre is in Gochada, Chitwan and the other in Basanthapur.

Nexus centers are water and energy hubs for remote areas in Southern Nepal, providing necessities and creating economic growth for the community itself. The centers are operated and maintained by entrepreneurs, being local families, cooperatives, women groups or communities. 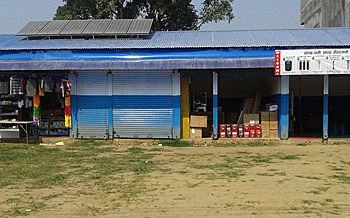 Local entrepreneur
The first water kiosk was opened in Gochada, Chitwan on 1 September. The kiosk is operated by 20-year-old Muna Mahato, together with the support of local entrepreneur Guneshwar Mahato. In addition, Dutch team member Marit Mathijsen is overseeing the operations for Nexus in Nepal.

Clean water from the Nexus Center is delivered in disinfected jars or bottles to ensure that the water remains uncontaminated.

It is essential that locals first buy their own jars and jerry cans before they can use them daily, by trading them in for clean full water jars or jerry cans. 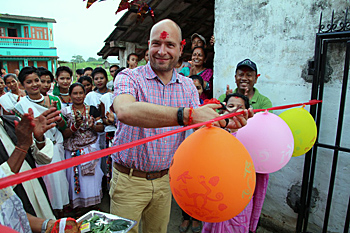 Second centre
Ten days later the second Nexus Center was opened in Basanthapur. Here Kamala Bhattari is responsible for operating the water kiosk. Besides being able to deliver clean water, she will also open a fancy clothes shop shortly.

Kamala is solely responsible for raising her 7-year-old son since her husband has been working in Qatar for the past years. Reuniting them as a family could very well be the catalyst that NEXUS Center can provide for Kamala.

A Hindu priest officially blessed the center Basanthapur and the festive event attracted at least 150 to 200 visitors.

About Nexus
Dutch-based Water Tech Trading and Swiss-based Weconnex have developed an innovative, entrepreneurial business concept for the BoP markets in the form of Nexus Centers. Nexus Centers are a network of water and energy hubs for remote areas, providing necessities and creating economic independence/growth for the community itself.

Main focus of the network is Terai, in Southern Nepal where the ground water is contaminated with arsenic and bacteria and there is limited access to reliable electricity.

This news item was originally published on the website of Aqua for All and Weconnex.