What are you looking for?
News 9 September 2015

A large part of these projects will be executed under the umbrella of the national Delta programme that will make the Dutch water system climate proof.

Around 70 investors participated in the bond issue which was an unusually high number considering the longer maturity of the issue. 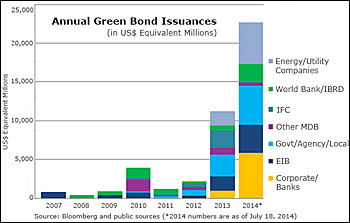 Investors show a growing interest in obligations - green bonds - that are issued to finance projects that include climate adaptation.

Investors with green interest
"We are happy with this highly successful deal in a rather volatile market. Initially we had focused on US dollar but in the current market issuing in euro was the better option. The green element definitely attributed to the success of this issue with almost half of the order book placed with investors with a green interest. This is the second year that we issue a 'waterbond'. We intend to bring a deal in this format each year", says Tom Meuwissen, Treasurer at NWB Bank.

This year´s issue is the largest euro-denominated transaction of this kind to come out of a supranational, sub-sovereign and agency (SSA).

The distribution by investor type and geography was as follows; 54 percent of the bonds were placed with asset managers and insurance companies, 28 percent with central banks and official institutions and 16 percent with banks.

In terms of geography 26 percent was placed in Germany and Austria, 24 percent in the Benelux and 16 percent in Asia. 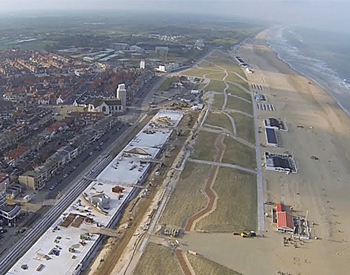 Construction of a flood defence along the North Sea coast in Katwijk, the Netherlands: a levee that incorporates a car park and that was later fully embedded in a dune.

Climate proof water projects
The bank will lend the money to projects that are financed by the regional Dutch water authorities in accordance with their mandate and as defined through the national Dutch Water Act. In accordance with this legislation projects will be funded that target:
● mitigation of climate change, being waterway management,
● adaptation to climate change, meaning investments in climate-resilient growth, such as flood protection and pumping stations,
● biodiversity projects which are related to water related biodiversity, such as remediation and dredging of sediments, transport and treatment of wastewater and disposal of sewage sludge.

About NWB Bank
NWB Bank is a public limited liability company, whose shares have been owned by public authorities since it was established in 1954 when large amounts of money were needed to repair the levees that had been destroyed by the big flood one year earlier.

The bank's principal objective is to provide funding to the public sector in the Netherlands as efficiently as possible and at the lowest possible cost.

Thanks to its solid status and financial expertise, the bank is in a position to raise more than sufficient funds at favourable terms on the international financial markets. Complementing this is the extremely low overhead structure of the bank. Its aim is not to achieve maximum profits, but rather achieve the best possible results in keeping with its character.

This news item was originally published on the website of Nederlandse Waterschapsbank.