Netherlands Organisation for Scientific Research (NWO) has officially launched a second call for proposals for its research programme Urbansing Deltas of the World (UDW).

Interested parties can apply for preliminary proposals, which can be submitted until 16 March 2015. 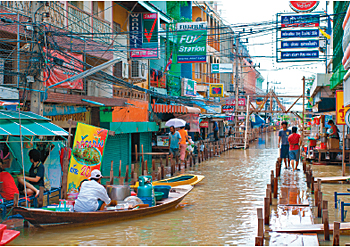 Research projects are funded that build sustainable South-North public-private partnerships that effectively generate, translate and apply knowledge for innovation in business and practice.

For potential applicants in search of partners, UDW provides the opportunity to contact and make use of the networks of the Netherlands Water Partnership (to search for Dutch private sector parties) and the Delta Alliance International (to search for knowledge institutes in Developing Countries)

First call
The first call for proposals in 2013 aimed at North-South consortia, working in public-private partnerships. These consortia were invited to submit a proposal for an integrated five-year project.

Seven research proposals were awarded on deltas and water related issues in India, Bangladesh, Vietnam, the Netherlands, Indonesia and Mozambique.

The total budget for these first projects was 5.5 million euro.

October last year, NWO invited researchers to send in new ideas for potential projects. NWO used this input to further define the content and conditions of its second call.

This news item was originally published on the website of Netherlands Organisation for Scientific Research (NWO).