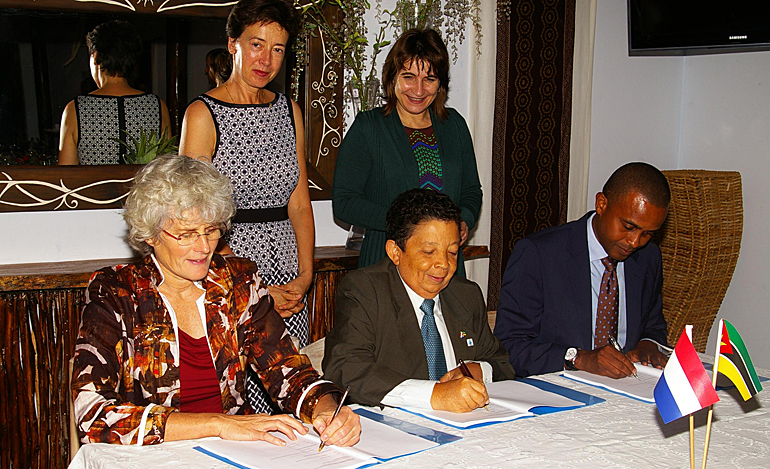 The Netherlands Water Partnership (NWP) and the Plataforma Moçambicana Águas ( PLAMA ) signed an agreement for future cooperation and sharing of experiences, both operating as public-private network organisations.

The agreement was signed by board member Jacqueline Barendse of NWP (left), president Manuel Alvarinho of Aquashare (middle) and president Mario Macaringue of PLAMA (right).

The signing took place in the presence of the Dutch Ambassador Frederique de Man (back left) and Dutch Minister Lilianne Ploumen for Foreign Trade and Development Cooperation (back right).

Joint action plan
The Dutch NWP assisted in the start up of the Mozambique water partnership PLAMA as a national and international network organisation. In November last year the board of PLAMA attended the International Water Week Amsterdam. During this visit NWP and PLAMA exchanged ideas on an action plan for 2014.

Both partnerships agreed to cooperate to implement the action plan with local partners in both countries. 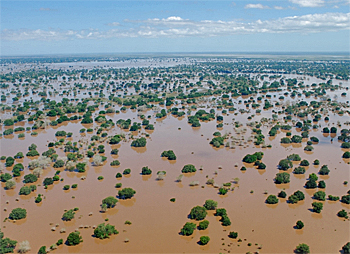 Severe floods in Southern Mozambique along
the river Limpopo in January 2013.

Water management, port development and flood protection
The signing ceremony was part of a Dutch trade mission to Mozambique, led by minister Ploumen.

Mozambique and the Netherlands have a longstanding relationship on water supply, water resource management and port expansion.

Dutch organisations have been involved in water supply and irrigation projects for many years. In Beira, Dutch dredging companies are active in the port expansion project.

Since the severe floods in 2013 this partnership intensified and Dutch water experts are advising the Mozambique government on flood protection.

About PLAMA
Plataforma Moçambicana de Águas (PLAMA) is the network organization for the Mozambique water sector, aiming for self-organization and increased performance, with respect for other sectors of the Mozambique economy and society, and with respect for the international water sector. Dialogue and information sharing will be the key instruments in achieving this goal.

PLAMA is hosted by Aquashare, the network for Mozambican water professionals. Early December 2013 the chairman, board and executive body was officially installed. The technical assistance by NWP was started mid December 2013.

This news item was originally published on the website of Netherlands Water Partnership (in Dutch only).