Founder and CEO Boyan Slat of Ocean Cleanup signed an agreement with the mayor of the Japanese island Tsushima about the deployment of its first floatable installation to remove plastic waste from the sea.

The island Tsushma is situated halfway between Korea and Japan. Every year 30,000 cubic meters of trash is deposited on its shores. The collection of this garbage costs about 5 million USD annually. The pilot array from Ocean Cleanup will be catching trash before it reaches the shoreline, potentially saving costs.

The feasibility is currently being researched and Boyan Slat expects its first installation to be operational in the second quarter of 2016. 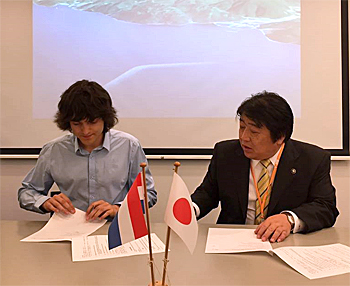 Boyan Slat and Tsushima Island’s mayor Yasunari Takarabe sign agreement for the coastal pilot on 20 May.

The pilot installation will be operational for at least two years, catching plastic pollution before it reaches the shores of the proposed deployment location of Tsushima island.

Tsushima island is evaluating whether the plastic can be used as an alternative energy source.

Boyan Slat, 20 year-old founder and CEO of The Ocean Cleanup: "Taking care of the world’s ocean garbage problem is one of the largest environmental challenges mankind faces today. Not only will this first cleanup array contribute to cleaner waters and coasts but it simultaneously is an essential step towards our goal of cleaning up the Great Pacific Garbage Patch. This deployment will enable us to study the system’s efficiency and durability over time."

This news item was originally published on the website of Ocean Cleanup.