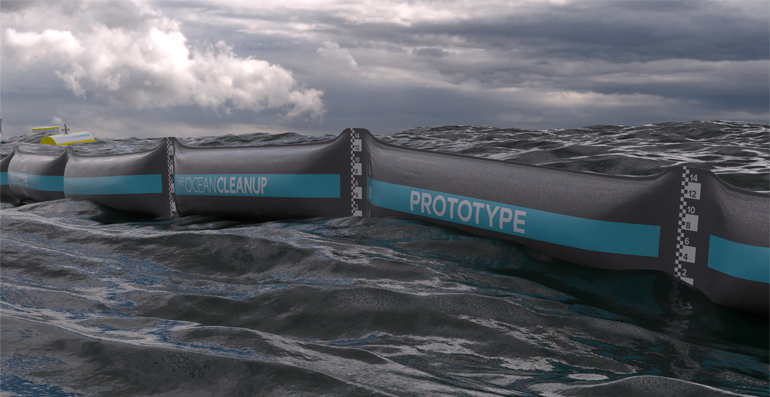 Dutch foundation The Ocean Cleanup announced that it has successfully raised 21.7 million US dollar in donations to initiate its first large-scale trials of its clean up technology in the Pacific Ocean later this year.

This significant funding round is led by San Francisco-based philanthropists Marc and Lynne Benioff and an anonymous donor. Other supporters include the Julius Baer Foundation, Royal DSM, and Silicon Valley entrepreneur/investor Peter Thiel.

The foundation recently conducted trials in the North Sea to test the behaviour of a new developed boom on waves (on top photo). 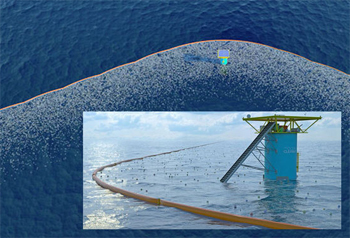 The concept is to use the rotating currents in the ocean to concentrate the plastic garbage  so its can be removed and disposed.

The Ocean Cleanup aims to launch its first experimental clean up system in Pacific waters by late 2017.

It will represent the most important milestone on the road to the full-scale clean up of the world’s oceans. 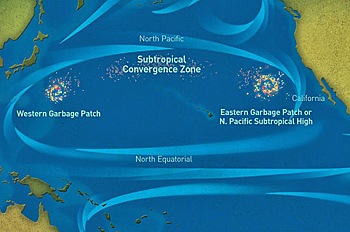 Three big garbage patches that float around in the Pacific ocean.

Impacts on future of oceans
"Lynne and I are thrilled to support The Ocean Cleanup's important goal of eliminating plastic in oceans," said philanthropist Marc Benioff, Chairman and CEO, Salesforce.

"With Boyan's innovative leadership, I believe The Ocean Cleanup will have an incredibly positive impact on the future of our oceans. I hope other leaders will join us in supporting these efforts."

Boyan Slat, founder and CEO of The Ocean Cleanup, stated: “Our mission is to rid the world’s oceans of plastic, and this support is a major leap forward towards achieving this goal. Thanks to the generous support of these funders, the day we’ll be returning that first batch of plastic to shore is now in sight.”

More details on the large-scale trials will be released shortly.

'We develop state-of-the-art technologies to enable a clean future. We are The Ocean Cleanup'