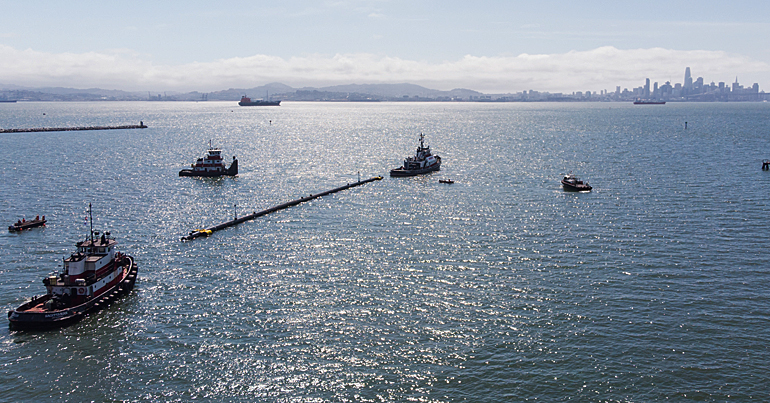 The Ocean Cleanup has successfully completed a two week tow test with a 120-meter floater segment of its ocean garbage collection system.

The test started with the assembly of the segment on Alameda Point, a former naval base, in California. Once completed the unit was towed to the Pacific Ocean, some 50 miles outside of San Francisco’s Golden Gate.

The segment was towed in various directions to test its hydrodynamics behaviours. The next step is to tow a 600 m long segment and test it in a fully operational configuration. 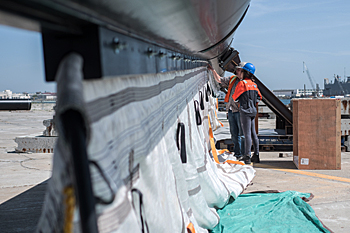 Assembly of the floater segment with the screen underneath.

With and against the current
The purpose of the tow test is to see how the system behaves in the water, as well as the screen’s performance under tow and during various manoeuvres at sea.

To confirm the system’s behaviour at sea, the tug (on top photo when leaving Alameda Point) followed an elaborate pattern, going with and against the current and the waves, and under different weather and sea conditions.

The test segment departed from San Francisco Bay with the screen pulled up to the floater.

Screen down
The screen was lowered only after the first testing pattern had been completed, after which the entire pattern was repeated once more, with the screen down.

Engineers will actively monitor and record the system responses to help us find the safest and most efficient way to transport it the much greater distance of more than 1,000 nautical miles it will go to get to the patch. 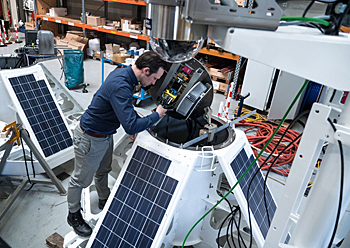 Checking the system’s electronic components. The system relies on the sun to power everything from AIS, satellite communications, cameras and sensors.

Drifting behaviours
The screen is the part of the system that is meant to concentrate the sub-surface plastics against the floaters.

It also plays an important role in the drifting behaviour of the system once it is fully deployed to freely move on the currents and the wind.

The 120 m segment will now be used for the next tow test with a 600 m segment that will also include the custom-built tow heads.

The full collection System 001 will be taken to international waters, 220-240 nautical miles off-shore from San Francisco.

After gathering all practical knowledge needed to tow the full-length system safely, it will be transported into the patch later this summer to begin cleaning.

Assembly of the 120 m long floater segment in Alameda, California, just prior the first tow test.