The Ocean Cleanup Foundation, founded by the 22-year-old Dutch Boyan Slat, announced its next major research mission: an aerial expedition.

In September and October, a series of low-speed, low-altitude flights will be conducted across the Great Pacific Garbage Patch in a C-130 Hercules aircraft, using expert spotters and state-of-the-art sensors.

The aim of the new expedition is to accurately measure the biggest and most harmful debris in the ocean. It will be the first-ever aerial survey of an ocean garbage patch.

Last year The Ocean Cleanup organised an expedition with 30 ships to map the locations of the accumulation zones. 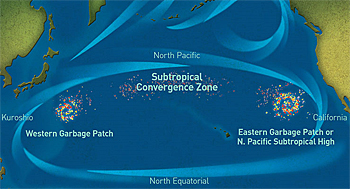 Patches of garbage in the Pacific Ocean.

Identify large pieces
In order to be able to solve the plastic pollution problem, the foundation wants to understand its dimensions.

Knowing how much and what kind of plastic has accumulated in the ocean garbage patches is especially important.

This determines the design of cleanup systems, the logistics of hauling plastic back to shore, the methods for recycling plastic, and the costs of the cleanup.

The conventional method of measuring ocean plastic, using nets of less than a meter (3 ft) wide, has proven to be inaccurate because it seriously underestimated the total amount of plastic. 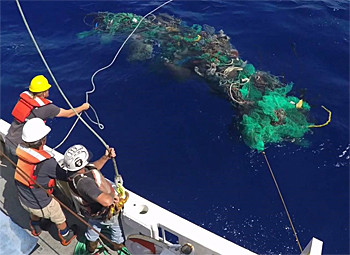 Garbage taken on board on one of the vessels during the previous expedition.

Even bigger garbage
With the mega expedition large nets -measuring 6 m across - were dragged, accurately quantifying debris of up to half a meter in diameter.

These ghost nets are known to be a major hazard to vessels and marine life.

This is where the aerial expedition comes in, as it quantify the largest pieces of trash in the ocean in an area of 6,000 km2.

The C-130 aircraft is scheduled to make several flights from 26 September to 7 October.