Ocean Cleanup announced the deployment of its new prototype on the North Sea. It is one of the last steps in preparation of the launch of the first plastic recovery system in the Great Pacific Garbage Patch this summer.

The new prototype no longer consists of an inflatable rubber type barrier but has HDPE solid pipes with a screen hanging underneath.

On his website founder and CEO Boyan Slat of The Ocean Cleanup described the metamorphosis of the prototype he and his team have been working on for the past two years. 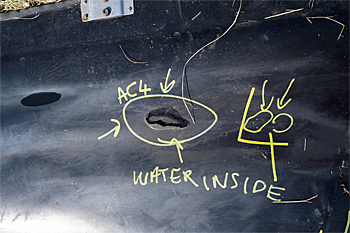 Unscheduled learning: leakage of the inflatable booms of the first prototype.

Leakage inflatable booms
‘The North Sea Prototype 1 rapidly taught us that a barrier design inspired by conventional oil containment booms won't be able to last at sea for a very long time’, Slat writes on the website.

‘The inflatable air chambers showed a tendency to leak very quickly, and the connection between the boom and the mooring wasn't able to cope with the high loads.’

Testing of the floating rubber booms of the first prototype on the North Sea provided invaluable input for the structural engineering team who incorporated all these lessons in an completely revisited design with hard plastic pipes.

Testing in small sections
According to Slat the second prototype has been tested on the North Sea in smaller sections. ‘If such a section can last at sea, this is a good indication that a full-length system will also be able to survive’, he writes.

‘Although the conditions at our North Sea test site aren't identical to those in the Great Pacific Garbage Patch, the results of these prototypes are qualitative, but because the conditions are conservative, we can rapidly assess which parts cope well and those that need improvement.’

Second prototype with a hard plastic floater pipe and a connected underwater screen.

New screen design
A mayor engineering challenge has been the connection of the hard floater pipe and the flexible screen hanging underneath.

Last year two 12 m long test sections were deployed and the connection proved to be strong enough to survive even a severe storm with waves up to 9,5 m. However, not so the screen itself.

The screen material was a laminate consisting of polyester fibers covered by a layer of TPU on either side. Water ingress occurred at the edges of the material, which allowed the water to get in between the TPU layers.

Learning from this screen failure, several new features have been included in design, such as a stronger polyester fabric and a strong-line once every meter to create a direct load path between the ballast weights and the floater connection. 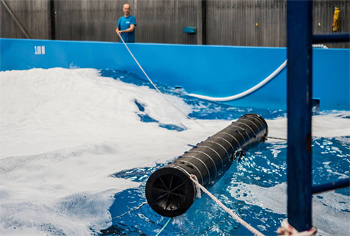 A 3-meter scale model tested in a wavepool earlier this year.

Pressure on timeline
To validate the new screen design three additional tests have been conducted. According to Slat the ‘unscheduled learning’ has put more pressure on the timeline.

‘But we are happy that we discovered them last year on a small section of the system in the - much more accessible - North Sea, instead of with a screen 600 meters in length, 1200 nautical miles offshore’, he remarks.

‘And, if things go according to plan, we will still be on schedule to launch our first cleanup system this summer’.

This news item is based on a report written by Boyan Slat on the website of The Ocean Cleanup.