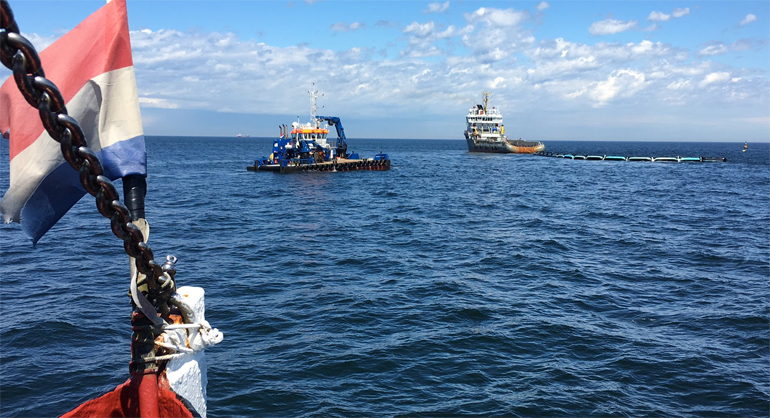 A 100 meter-long tube has been placed in the North Sea, 23 kilometers of the Dutch coast by The Ocean Cleanup foundation.

The tube is a prototype version of a 100 km long boom that is to start clean up the plastic soup that is floating around in the Great Pacific between California and Hawaii by 2020.

The Ocean Cleanup earlier this month raised 1.5 million euro for this test with the prototype. One third was contributed by Royal Boskalis Westminster, one third by the Dutch government.

The remainder of the funding has been pledged by an anonymous philanthropist. 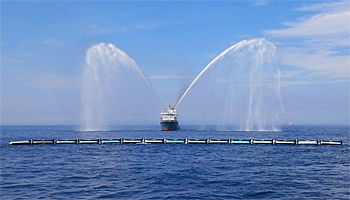 Surviving severe weather
The prototype was succesfully connected to a bouy (on top photo) and will remain in the North Sea for a year. It won’t filter plastic immediately.

Mainly this pilot is a test for the survivability of the system in severe weather conditions.

Sensors will track every motion of the prototype and the loads it is subjected to. 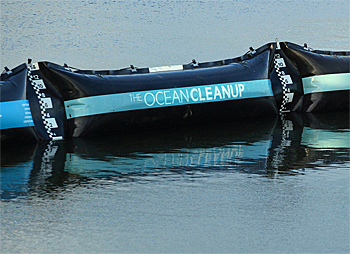 A good test
"If it doesn’t break there, it doesn’t break anywhere", said Boyan Slat. He also notes that a successful test does not necessarily mean the prototype will survive. "I estimate there is a 30% chance the system will break, but either way it will be a good test."

At the North Sea test site, conditions during a minor storm are more severe than those in exceptionally heavy storms (occurring once every 100 years) in the Pacific Ocean.

The data gathered will enable engineers to develop a system fully resistant to severe conditions during the cleanup of the Great Pacific Garbage Patch. 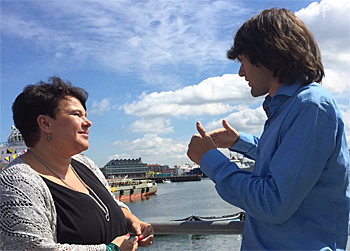 Stop degradation of plastic soup
On the occasion of the presentation of the porotype, Dutch Environment Minister Sharon Dijksma said: "The Ocean Cleanup is an inspiring example of how we can tackle the growing problem of ocean pollution."

Dijksma mentioned the importance of the project.: "Boyan’s prototype will turn out to be the successful solution for cleaning up the mid-ocean gyres. This is crucial to prevent permanent damage to the environment and marine life, due to the degradation and fragmentation of plastic waste materials."

Exciting next step
Peter Berdowski, CEO of Boskalis, said: "It has been inspiring to work with The Ocean Cleanup. Now that everything is ready, we are looking forward to the really exciting next step, with the transportation and installation of the barrier. I wish Boyan and his team success with their journey towards a plastics-free ocean."

This news item was originally published on the website of the Ocean Cleanup.

Searching for the best design of the boom a series of tests have been conducted at the Maritime Research Institute Netherlands (MARIN) and research institute Deltares.