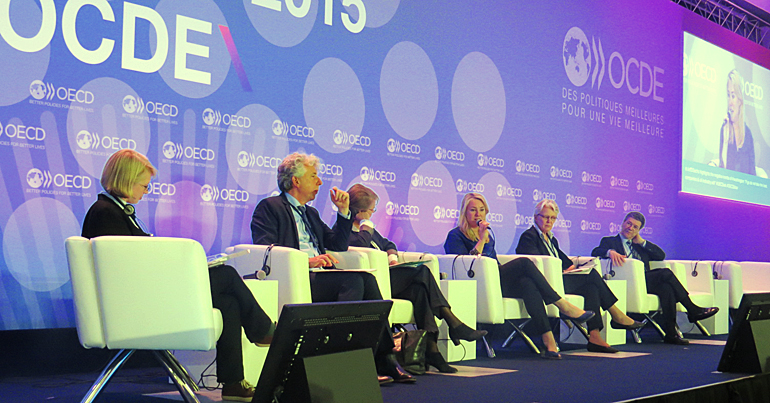 The battle against global water problems arising from climate change should not be waged using technological solutions alone. Sound management and long-term funding are at least just as important. So said Dutch minister Melanie Schultz van Haegen of Infrastructure and the Environment at the OECD Ministerial Council Meeting in Paris on 3 June.

Building trust
"Countries must create an enabling environment. The solution is political. Sustainable solutions demand that politicians be courageous enough to look beyond their term in office in the interests of our economies and societies. It requires credible and responsible management upon which investors can build, with transparent accountability and clear cost-benefit analyses. Only this way can we attract investment in preventive measures, instead of repeatedly reacting to disasters", according to minister Schultz. 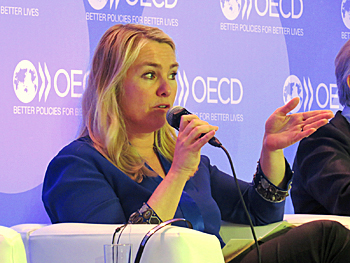 Dutch minister Schultz participated in a panel discussion on future scenarios for sustainable and inclusive growth.

Doing nothing is not an option
In Paris, minister Schultz outlined the serious consequences of climate change. The sea level is rising and weather is becoming more extreme. At the same time, the population is rising, urbanisation is moving at a fast pace and economies are growing. "Water-related disasters are not only occurring more often, we also have increasingly more to lose. If we do nothing, the losses incurred due to drought, floods and poor sanitation will be immense. According to the University of Oxford, doing nothing will end up costing 500 billion dollars a year."

According to Schultz investing in preventive measures is cheaper, especially riding on the back of investments in infrastructure that have to be made in any case.

Dutch long term planning as an example
Minister Schultz introduced the Dutch Delta Programme - with its long term perspective to protect the Netherlands against flooding and to secure freshwater supplies - as an example for the world.

Schultz mentioned the guaranteed funding and the solid legal basis in law as the basic ingredients of success. "We are working together with all stakeholders: all levels of government and civil society, research institutes and the private sector. Water ignores institutional boundaries, collaboration is the key to managing it."

Public and private capital
The Netherlands welcomed the OECD’s new 'principles of water governance'. "We are also a firm supporter of new, broad OECD recommendations regarding water", said Schultz. "Prevention pays: every dollar you spend, delivers 7 dollars to the economy. Governments play a vital role in linking the public and private capital that are both necessary for the transition to a climate-proof economy."

Actions rather than words: Delta Coalition
In March this year, the Netherlands took the initiative in the formation of a Delta Coalition: a platform in which low-lying countries work together, and share experiences and expertise. Colombia, the Philippines, France, Japan, Korea and Vietnam have already declared they will participate. In Paris, Minister Schultz invited other countries to take part, in order to arrive at and implement concrete cooperation projects. 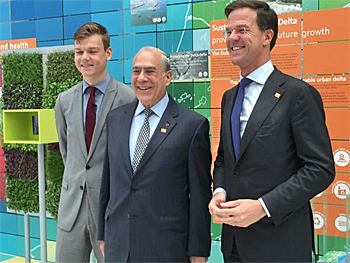 The Netherlands chaired this year’s meeting in which the major issues on which the OECD is working were discussed at the political level. France, the Czech Republic and South Korea were the Vice Chairs.

The theme of this year’s council meeting was 'Unlocking Investment for Sustainable Growth and Jobs'. Investment in climate adaptation was strongly promoted at the meeting as a means of contributing to the sustainable growth of our economies – with water as the linking factor.

This news item is based on a press release on the website of Dutch ministry of Infrastructure and environment.

Delta programme
Ministry of Infrastructure and the environment
The Hague, the Netherlands
www.government.nl/delta-programme