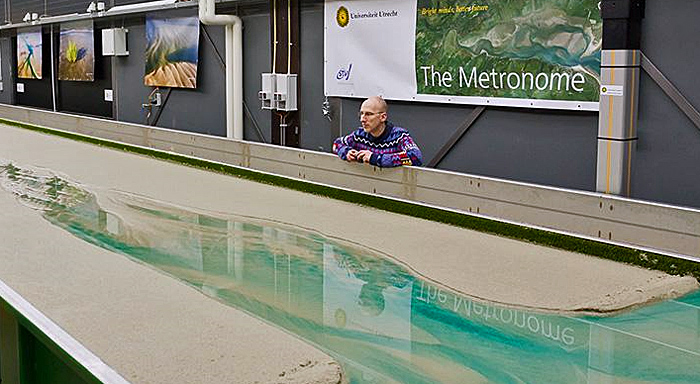 To create reversing tidal flow and sediment transport on scale, professor Maarten Kleinhans of the Utrecht University built a twenty by three meters flume, tilting back and forth every half minute at a small slope.

This tilting-principle simulates ebb and flood in a setup of a 1:1000 scaled river mouth with sand and water. This enables to study the changing patterns of rivers.

The Metronome tidal facility was officially opened on 12 January. The first experiments have been conducted and are promising. 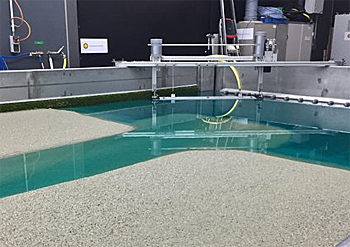 Forming of river mouths
Maarten Kleinhans (on top photo next to his invention) conducts research on rivers and deltas both on Earth and on Mars.

He aims to understand the genesis and emergence of self-organising patterns of rivers from the underlying processes of flow, tides and waves, sediment transport, bank erosion, interaction with vegetation, and channel bifurcation.

Rivers create unique patterns of sand and water. How this works is still unknown and regular floods make it urgent to study the way rivers influence our ecosystems.

Using this new research facility, Kleinhans can simulate the formation of river mouths. These shallow coastal waters are shaped by the supply of river water and tidal currents and are breeding grounds for shellfish and fish, and so of great ecological value. 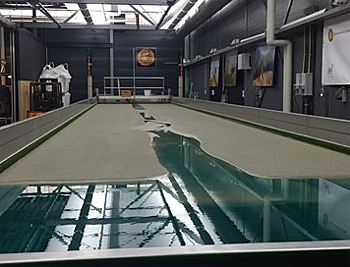 Simulating tidal-dominated estuary
Kleinhaus discovered that only a few laboratories attempted to create tidal systems, and all of them came up against considerable problems of scale.

"These included experimental estuaries that would not reach a dynamic equilibrium condition, but instead became static, or the forming of ripples and scours that were disproportionally large for the given water depth compared to nature", Kleinhaus claims.

During his research he discovered that ebb and flood is additional principle for simulating flow, and specifically sediment transport.

So Kleinhaus designed a flume that is periodically tilted as a whole, the slope is alternatingly directed landwards and seawards.

The tilting of the entire flume drives equal amounts of flow and sediment transport in both directions. In addition, the flows create river and storm waves. 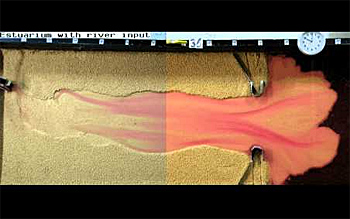 Improve computer models
Every minute in the Metronome corresponds to a day in reality. The changes in the landscapes are followed with cameras, and the images are used to improve insights and computer models.

After the examination of the natural development of river mouths, the facility will also be used to study interventions, such as deepening of waterways, as well as future scenarios, such as the long-term effects of sea level rise.

The Metronome tidal facility was officially opened by dean of the university´s Faculty of Geosciences, Pete Hoekstra, and managing director of research institute Deltares, Maarten Smits.

In this video professor Maarten Kleinhans explains the making of the Metronome.