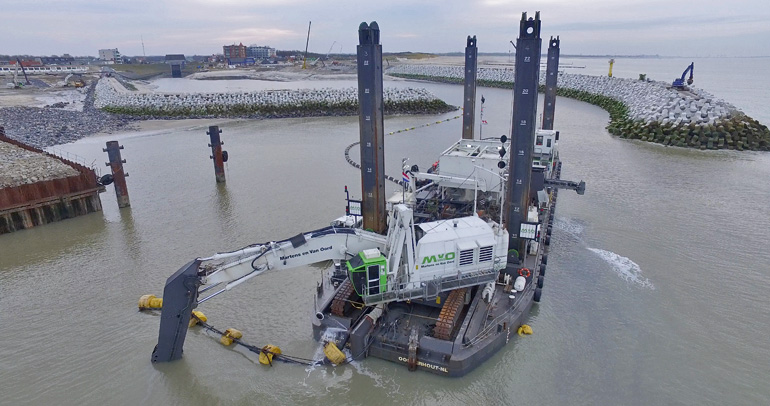 Recently contractor Martens & Van Oord deepened the entrance for a new sea marina in Cadzand, the Netherlands. Hidden in de seabed were old military explosives from the Second World War.

To safely dredge the bottom of the marina, a Damen DOP350 submerged pump was used to suck up the sediment, including the occasional unexploded ordnance (UXO). 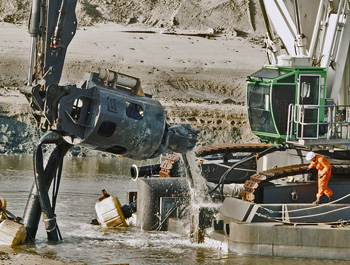 Safe and continuous dredging
The DOP350 was attached to a pontoon-based excavator. The DOP pumped the bottom material – sand and occasionally UXOs – to a reinforced screening installation.

From there, another Damen pump was used to bring the screened sand further to replenish the nearby shores.

The choice for using the DOP was a simple one: the submersed dredge pump ensures a continuous process in an UXO-area, contrary to mechanical dredging.

This DOP head was designed for mining a maximum concentration using pressurised water to fluidise the bottom material. 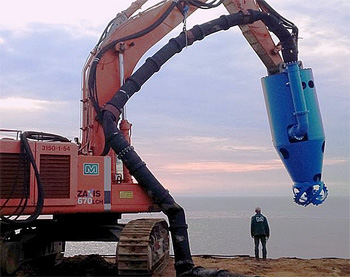 German sea dike
Damen Dredging Equipment has delivered DOP submersible dredge pumps to many dredging contractors around the world. As a result, the DOP pump has been used at a variety of dredging projects.

A recent user of the submerged DOP350 pump was Reinhold Meister Wasserbau for the construction of a 2.5 km enforced dike along the German coast.

The DOP350 submersible dredge pump was mounted on an excavator to relocate the dumped sand to several sedimentation areas where dumper trucks could transport the sand further to the exact location on the dike. 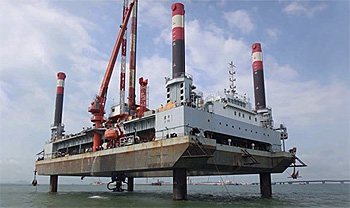 Clearing seabed for tunnel in Hong Kong
Another recent example was the use of two DOP250 submersible dredge pumps in Hong Kong for the construction of a 6.7 km long tunnel to connect Macau, Hong Kong and Zhu Hai.

Before placing the tunnel elements, the seabed was levelled and a gravel bed was prepared. Due to the tides, silt partly covered this gravel bed, and the DOP250s were used to remove the silt.

Rigidly mounted under a jack-up platform, two submersible pumps worked together, pumping the silt away and clearing the sea bed very accurately.

This news item was originally published on the website of Damen Dredging Equipment.

DOP pump working on seabed for tunnel in HongKong