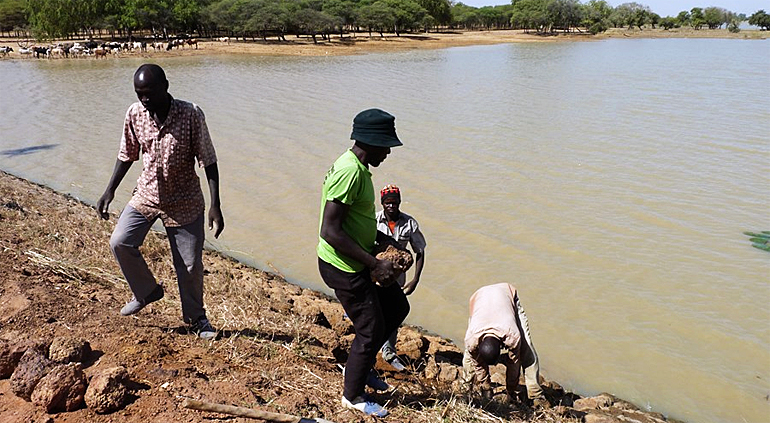 Many dams in Burkina Faso are in such a bad shape that they need to be rebuild. One third of the country’s 100 dams, that hold back water in barrages, need urgent maintenance. Regional water agency Gourma (AEG) has started a program to monitor, maintain and renovate essential barrages. The upstream construction of small sand dams, instead of large concrete dams, may be an answer to the solve the issue of the silting of the barrages.

This was suggested by Ewoud de Jong Posthumus who is working for World Waternet at their Burkinabe partner L’ Agence de l’Eau du Gourma (AEG). De Jong Posthumus recently wrote a blog on the issue of the poor condition of the dams and the silting barrages. 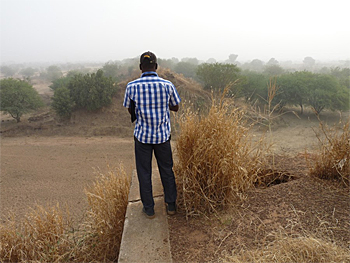 Inspection of a levee breach of a barrage in eastern Burkina Faso.

Inspection of barrages
In his blog De Jong Posthumus writes that he had joined a mission in December to identify the state of barrages in the eastern region. It turns out that one third of the dams (16 in total) are in dire need of maintenance and 35% (18 in total) of the barrages are in such a bad state that they have to be reconstructed.

Due to the absence of permanent rivers in eastern Burkina Faso the population is dependent on surface water, retained in more than a hundred reservoirs (referred to as barrages) and thousands of wells (forages), which give access to groundwater sources.

Most of the barrages were constructed by various organizations and international donor aid in the 70s and 80s during an extreme period of drought that affected West Africa. However, these projects were lacking a good plan with regard to the maintenance of the barrages.

As a result many dams - essential for the water supply and socio-economic development - are in very poor condition right now. 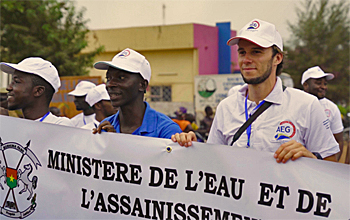 Walk for water by the team of the Regional Water Agency Gourma with Ewoud De Jong Posthumus (right). The walk was part of the first Foire de l’Eau in Fada n’Gourma in late March.

Involving local communities
The regional water agency Gourma (AEG) has started a program to monitor, maintain and renovate essential barrages. De Jong Posthumus mentions the rehabilitation of the barrage in Dargo and Bulsa as good examples.

In Dargo, the AEG has implemented a program with a capacity building approach. People from the local community (see top photo) have been hired by the water agency to strengthen the dyke and to construct a stone barrier around the barrage.

The stone barrier acts as a sand trap and at the same time it marks a protection zone. Within this zone no agricultural activities are allowed. Due to this new zone farmers had to move further upstream. To compensate for the expenses, the famers were given fruit trees that have been planted within the protection zone.

The farmers literally reap the fruits and simultaneously contribute to reforestation which has a positive effect on the microclimate around the reservoir.

Sand damming
In his blog De Jong Posthumus also brings up the issue of erosion and silting of the barrages. In particular the barrage in the city of Bulsa that has lost significant storage capacity due to sedimentation caused by erosion upstream.

The regional water agency Gourma has investigated the feasibility for excavating this silted barrage.

According to De Jong Posthumus the excavating of about 20 Olympic swimming pools of sand has to be repeated about every 20 years. As this is a costly affair, he looked into the possibility to construct low sand dams on ephemeral streams.

De Jong Posthumus reports that a consultant of regional water agency has included the sand damming technique in the recommendations.

Read the full blog on the website of World Waternet.