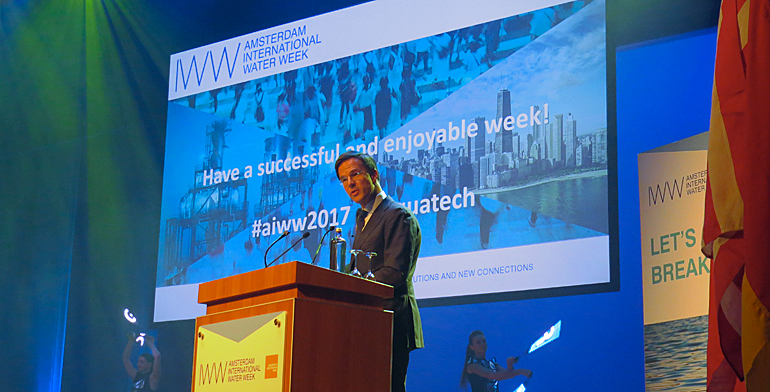 ‘It all comes down to one thing: valuing water’, said Dutch Prime Minister Mark Rutte at the Opening Ceremony of the Amsterdam International Water Week on 30 October.

Rutte told that he has lobbied for this theme as a member of the High Level Panel on Water (HLPW) in recent years. ´If we know what water is worth to each stakeholder, we can make the most of trade-offs and maximise the total value of water to society’, he said. Next to economic value, water also has cultural, social and environmental values.

The Dutch prime minister is one of the eleven sitting heads of states that form the panel initiated by the United Nations and the World Bank. The panel aims to mobilize global support for the implementation of the water-related Sustainable Development Goals (SDGs). 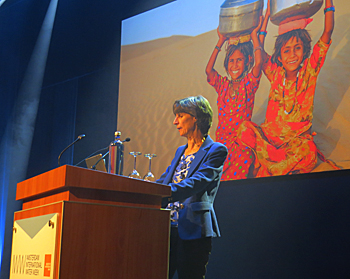 Laura Tuck, Vice President for Sustainable Development of the World Bank took a stand for girls and their future development that depends so much on the availibity of water.

Opening Ceremony
Prime Minister Rutte invited all 800 delegates that attended the Opening Ceremony to exploit the opportunities presented, but also to tackle the problems it creates. ‘The event provides an excellent platform for government bodies, cities, industry, water companies, young people and NGOs to create alliances, share knowledge and turn promising plans into practice’, he mentioned.

‘Climate, water, poverty - and all the other SDG themes - are interrelated’, Rutte said. ‘Trying to tackle them is like trying to solve a Rubik's cube. In the Netherlands, we always start with the blue side’.

Better reflection of value
Just prior to the Opening Ceremony, the High Level Panel on Water held a roundtable on the issue of valuing water where the recent revealed provisional five principles leading to the better reflection of the value of water as was mentioned by the Prime Minister.

The principles will officially be launched at the 8th World Water Forum in Brasilia in March and in the run up a team of experts organised roundtable sessions all around the world to collect comments for improvement.

The roundtable session in Amsterdam was one of the last consultations. 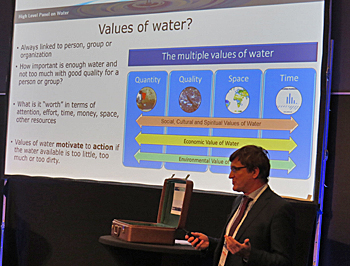 At a side event Willem Mak explains that valuing water is a constant process as the value changes in tme and place.

Conflicts of values
The consultation is Amsterdam showed that trust is an important element as the value of water changes in time and place. It also changes when different stakeholders are involved. To maximise the value it is important that stakeholders talk about trade offs to balance the different values. Trust was mentioned a crucial element when talking about who pays and who gets the benefits.

One of the examples given was the case of the Dutch beer brewer Heineken that built a production plant in Mexico and in order to compensate for the use of water, it planted a forest.

Another example was given from Mali where people are not accustomed to pay for water. Local authorities started an awareness campaign that the water  infrastructure costs money and that if the people pay for this service, the supply and the water quality can be improved.

Update version
At the Amsterdam International Water Week the revised version of the principles was presented. According to project manager Willem Mak at the Dutch Ministry of Infrastructure and Water Management, many consultations discussed the integration of the human right to water in the principles.

‘It was recognised that cost recovery is an important element for sustainable water supply’, said Mak in Amsterdam. ‘But many urged to keep water tariffs and taxes at affordable prices, also for the poor.’

The preamble of the five principles has recently re-edited and now addresses this issue and mentions: where tariffs and prices are used, safeguards are essential to ensure that access to water is available, equitable and affordable to all.

Stay tuned as news items on this website will keep you posted on this event all week.