Outlook 2019: What trends will shape the global water sector this year?

(editorial by Jac van Tuijn)
A new year ahead, full of new setbacks and opportunities. Let's make the best of it. Personal and professional.

Some seek opportunities for a nation, for a company or for their own. Others seek global cooperation for the benefit of all. Are these two sides of the same coin, called globalisation? It will be interesting to see the gains and losses in 2019 for those who built walls and those who break them down. How will the process of globalisation further develop in 2019? Traditionally, it has always been led by global trade, but today’s globalisation is increasingly led by the personalisation of modern society with its digital technology.

Let’s embrace the opportunities of modern globalisation and its technology, but keep our eyes open for local concerns and curve the negative effects on marginalised people. Leaving no one behind is this year’s theme of World Water Day on 22 March. 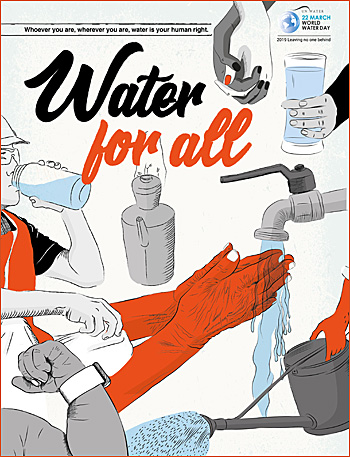 This year's theme of World Water Day is 'Leaving no one behind' and addresses the minority groups that lack access to clean water and toilets.

Global versus local
Local unrecognised concerns are often related to problems with too little, too much or too polluted water. These relations make local water problems complex and difficult to solve.

Last year the United Nations reported on the progress of the Sustainable Development Goal 6 on water and concluded it is ‘off track’. And this not only concerns the need for more visible water infrastructure such as taps, toilets, pipes and treatment plants. But the report also mentions the invisible needs, such as the protection of fresh water resources from overexploitation and the effective sharing of limited water resources among competing demands.

The latest version of this Dutch governance concept for complex issues is the ‘poldering tables’. In practice, this means that representatives of groups with different interests discuss solutions with the biggest potential. Each group has a specific aspect of a complex issue and – supported by experts - discuss which solutions suits best.

This year we will certainly hear more of this 'poldering' concept as the Water as Leverage programme enters its second phase in the Asian cities of Chennai, Semarang and Khulna. And also on World Water Day when the Dutch water authorities will announce their first projects of the Blue Deal programme - forging partnerships on integrated water resource management in 20 catchments in the world. 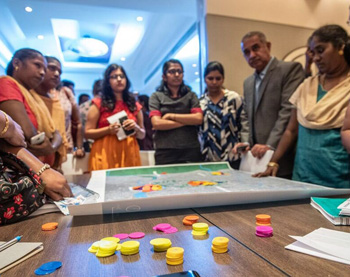 'Polder tables' are no ordinary discussion tables at conferences, but concern the solving of real water issues with a consensus by all parties involved. Here seen is a 'polder table' in Chennai, India as part of the Water as leverage programme.

Water-energy efficient cities
Cities will continue to grow, controlled and uncontrolled. Mayors will seek new ways to manage this growth and keep their cities liveable. Cities in older economies urgently need to replace their aging water infrastructure. However, many cities lack funds so the use of smart asset management will become more popular.

Better monitoring, combined with artificial intelligence, provides the opportunity for location specific repairs and extend the life of pipeline systems and treatment plants.

The realisation of these ambitious city climate plans will undoubtedly impact the development of urban water systems. That will also incorporate more use of storm water and waste water effluent where water demands exceed the availability from fresh water sources situated close to the cities.

Leaving no one behind
But cities also grow uncontrolled. Take the 700.00 Rohingya refugees that live in Kutupalong, Bangladesh. In one-and-a-half year, 27 refugees camps grew together and now form one big city of makeshift tents and shacks.

Efforts to provide enough safe drinking water for refugees across all the heavily congested sites has been a massive challenge for humanitarian agencies, requiring the drilling of thousands of deep tube wells and building water networks including the installation of pipes, dams, canals, filtering mechanisms and chlorination systems.

Leaving no one behind not only applies to the Rohingya refugees, but also for disabled, suppressed minority groups and the poorest 10 percent of the world. 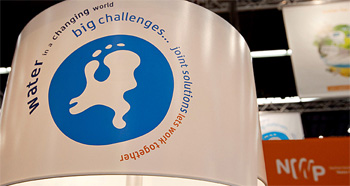 Leadership and coalitions
Two international water events that will take place in The Netherlands will stand out for their leadership. On the occasion of its 50th anniversary, the think-and-do tank IRC Wash, organises an international conference on water systems in March. IRC wants decision makers from all other the world to come together and think about improvement of water services as whole, not just a tap or a toilet. As a reality for everyone forever, not just a project for a few.

Global leaders of water utilities, cities and industries will again join the Leader Forums and discuss the progress and new development following the 2017-edition.

Something to look forward to will be the progress reports on the Amsterdam Agreements. Several coalitions of companies, institutes and authorities in the water sector have entered on real case projects to achieve breakthroughs on water issues.

The coalitions will show case their projects and share their latest knowledge and experiences. Hence contributing to the achievement of the UN Sustainable Development Goals in general, and SDG 6 on water in particular.

The Dutch water sector realises that water does not stop at borders and invites everybody to team up in 2019 for the development of long term solutions.