The 30MW project, to be created off the Isle of Wight, UK, will allow long-term operation of both German and Dutch turbine arrays, simultaneously optimising their performance and delivering reliable electricity to the grid. Construction of the energy farm is expected to start in 2017, with potential to be generating electricity from late 2018.

Optimising performance
PTEC will bring together a range of different tidal turbine technologies in one setting. They will be positioned in groups or arrays within an area of five square kilometres.

It is currently working with both tidal turbines suppliers to identify the optimal site layout and designs, taking into consideration the outputs of the Environmental Impact Assessment and consented envelope.

These decisions will be finalised in due course, with onshore construction scheduled to begin next year. 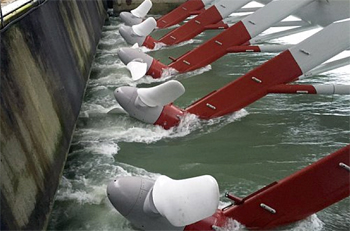 An array of five Tocardo tidal turbines is operational at the Eastern Scheldt storm surge barrier, the Netherlands, since September 2015.

Continued cost reduction
PTEC project director, Mark Francis said: “This is a major milestone for the project, which is of strategic importance to the UK’s tidal industry and will accelerate the growth of the sector as well as enable a continued cost reduction path for future tidal stream projects. “

Niels A. Lange, MD from Schottel Hydro said: “It is a privilege to be part of the largest consented tidal stream energy project in England and Wales. We are excited to join such a ground-breaking development.”

Hans van Breugel, CEO of Tocardo, said “After having deployed our turbines at various sites in the Netherlands and operating these projects successfully, we feel confident to jointly realise this world leading multi-MW tidal energy farm at the Isle of Wight”.

“Engaging with PTEC”, Van Breugel continued, “is a significant step in the commercialisation process of Tocardo’s standard offshore tidal solution, the UFS.

This news item was originally published on the websites of Torcado, Schottel and PTEC.