Zaans Medical Center is the fifth Dutch hospital to adopt to the Pharmafilter system for the handling of its waste and waste water.

In its new facility the hospital will replace its current urinals and bed pans by biodegradable plastic versions, enabling to dispose it directly in the utility room within the ward and process it as waste, together with the hospital's waste water.

Pharmafilter booked the order for its fifth hospital waste treatment system on 3 December. Three systems are already operational (on top photo the treatment building on the site of a hospital in Delft, the Netherlands) and a fourth is under construction.

Prefab construction of the fifth Pharmafilter for Zaans Medical Centre has already started and the completion of the separate treatment building is expected by mid-2016.

Zaans Medical Center expects to be able to move into its new facility by late 2016. 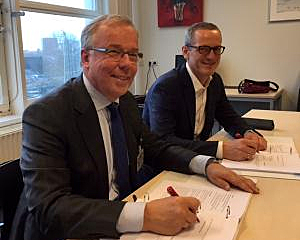 The shredded waste is transported via the sewage system, together with all the waste water, to a special building outside of the hospital where solid waste and waste water is treated together.

Energy and water reuse
The combined waste stream is first collected in a pit, followed by a separator to split up the solid waste and the waste water. The solid waste is digested in an anaerobic reactor to produce biogas.

The waste water is treated in a multi-stage process, including a membrane bioreactor, membrane ultrafiltration and ozone filtration. To ensure the removal of all micro pollutants, including pharmaceutical residues and bacteria, the final stage is a combined active carbon and ultraviolet filtration.

The water can be re-used in the hospital. At the new Zaans Medical Centre the effluent water will be reused to flush the toilets and to clean the shredders. 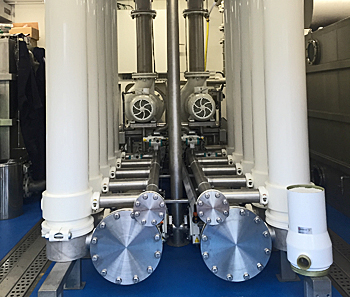 Vertical placed membranes of the membrane bioreactor to remove the BOD and COD oxygen demand of the waste water.

More fermentable biobased products
Biobased is well on its way to becoming a hot item in the hospital world. Pharmafilter has already developed a bioplastic urinal and bed pan that, once used, can be shredded. In a hospital there are many more products that can be made from fermentable material.

"It takes some time to develop new biobased equivalents to the oil-based plastic products that are currently used in hospitals. Especially the strict hygiene requirements are hard to meet", says hospital adviser Jochem de Louw of Pharmafilter.

De Louw is convinced that with the development of more biodegradable products, hospitals will get more interested in the Pharmafilter system. "More waste fed into the digester, means more biogas. This reduces not only the energy bill, but also the bill for the waste collection".

Animation showing the concept of Pharmafilter.