Consortium Levvel, consisting of construction firm BAM and dredging company Van Oord, has conducted trials placing several XblocPlus armour units on an artificial levee. The purpose of these trials was to investigate the speed and efficiency of the placement.

The XBloxPlus has been specially designed for the reinforcement of the 32 km long Afsluitdijk closure dam in the Netherlands. The production and placement of the real blocks is to commence later this year. 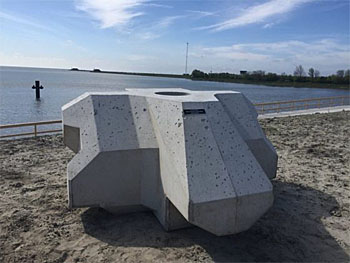 Innovative clamp
XblocPlus is a single layer concrete armour unit which is placed in a regular pattern: all the blocks on the slope have the same orientation, similar to roof tiles. This simplifies the placement process and it simplifies the approval process.

Placement trials were conducted with a hydraulic excavator equipped with an innovative clamp, stated BAM in its announcement.

Each single block weigh 6 ton and have been designed to have a retardant effect on waves.

The blocks will be produced by means of a fully automated process at a nearby location, and transported by ship to the causeway.

Low concrete consumption
The XBlocPlus amour unit has been designed by Delta Marine Consultants (DMC). This firm has gained a vast experience in the design of breakwaters and shore protections.

Following the development of Xbloc which started in 2001 and its market introduction in 2003, DMC has been involved in design, physical model testing and construction of many Xbloc projects around the world. 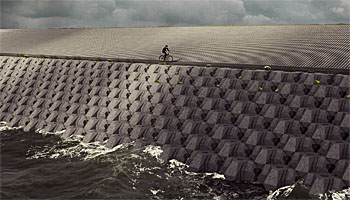 The special version, the Levvel-bloc of which 75,000 units will be produced to reinforce the Afsluitdijk closure dam in the Netherlands.

One of the main advantages of the XblocPlus compared to other available single layer blocks in the market is the low concrete consumption per surface area.

Levvel-bloc
The reinforcement work of the Afsluitdijk has been awarded to the Levvel consortium, including BAM, Van Oord and Rebel.

The consortium will use the new XblocPlus under the name Levvel-bloc of which a total of 75,000 will be produced.

In September 2018 XblocPlus will be tested in the Delta Flume of research institute Deltares in Delft, the Netherlands, with a scale of 1:3. Construction will start at the beginning of 2019.

This news item is based on the news release originally published on the website of XBloc.

Video recording of the placement trails of the XblocPlus on an artificial created slope.