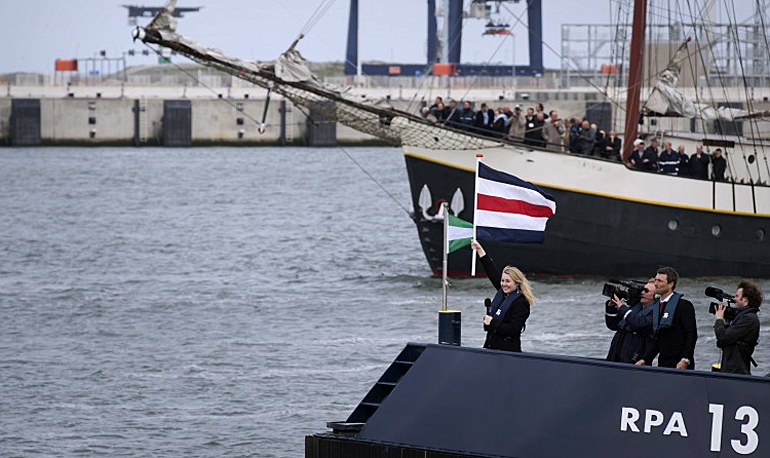 "With Maasvlakte 2, the Netherlands is throwing the door wide open to the newest generation of container ships. And we offer space for the latest terminals. The port is growing 20 percent larger, and the container capacity has doubled. Thousands of direct and indirect jobs will be created."

With these words Dutch minister Melanie Schultz van Haegen of Infrastructure and environment (photo above, with flag), officially opened Maasvlakte 2 for shipping on 22 May.

Two new deep port basins
In 2008 the Project Organization for the Extension of the Maasvlakte (Puma), a 50/50 joint venture between dredging and marine contractors Boskalis and Van Oord, started the extension of the Port of Rotterdam by creating 2,000 hectares of new port zone with 20 m deep port basins, so even the largest – next generation – container vessels can dock.

An important component of the project is the construction of the overall sea defenses. This was completed in July 2012 and construction commenced to make the new zone assessable for shipping. 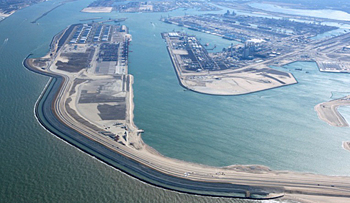 Ships can get to the Maasvlakte 2 passing the Nieuwe Waterweg (left up) and the now opened Yangtze canal (middle down).

The official opening marked the final phase of the port project with construction of two container terminals. Both terminals are scheduled to be ready by the end of 2014.

Less expensive
"Together we have succeeded in constructing this phase of Maasvlakte 2 according to schedule and well inside budget,’ said Hans Smits, CEO of the Port of Rotterdam Authority on the occasion. “The project has turned out 150 million euro less expensive than estimated. This becomes evident now that the construction has been largely completed".

Combination of reasons for lower costs
The Port of Rotterdam gives two main reasons for the lower costs. To start with, the project was thoroughly prepared, so that during its execution scarcely any unexpected matters arose.

It was partly due to this that there was also almost no delay as a result of legal proceedings. Appropriate forms of contract were sought with the various contractors, including agreements on enabling optimisation after the contract was concluded.

Half-open block dam
One important example of an optimisation is the design of the hard seawall. The seawall which has now been built consists of a half-open block dam and a cobble beach. The original design was a solid dike. This allowed savings in construction and maintenance costs, without sacrificing safety. 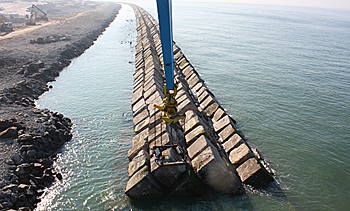 Another optimisation was the temporary cooling water discharge for the E.ON power station. A relatively expensive structure was replaced by a narrow canal to the Yangtzehaven.

Only loss of sand resulting from a storm with waves higher than 6.75 metres for more than 3 hours was the responsibility of the Port Authority. This kind of storm occurs once every 10 years on average. The weather helped here, as such a severe storm did not occur in the past few years.

This news item was originally published on the website of Port of Rotterdam.