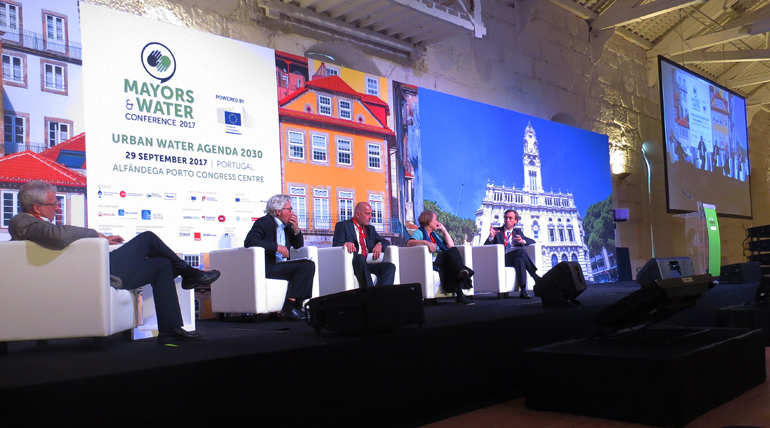 Eighteen European cities signed the Porto declaration that calls for the European Commission to join cities to develop a joint urban water agenda for 2030. The cities call upon the commission for support as water issues in urban areas are getting more complicated and a joint agenda on EU level could prevent each city to reinvent the wheel.

The declaration was signed by three Dutch cities, Leeuwarden, Eindhoven and Amsterdam.

The signing took place during the third Mayor & Cities Conference on 29 September. The conference was part of the Porto Water Innovation Week. 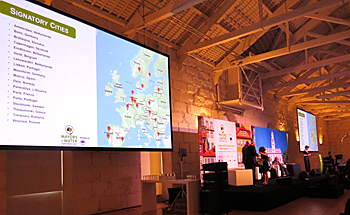 Eighteen cities from across Europe were present in Porto to sign the declaration on the Urban Water Agenda 2030.

Complex issues
At the conference, most mayors and city representatives mentioned the growing complexity of the water issues in cities. The old traditional task of a local utility to supply only drinking water is long past.

Utilities have got involved in waste water treatment, handling excessive rainwater and safe guarding the water resources in and around the cities. 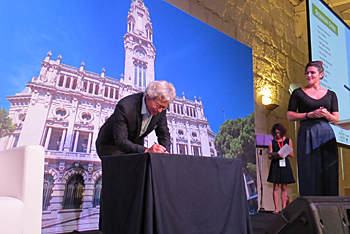 Mayor Ferd Crone signing the declaration on behalf of the city of Leeuwarden, the Netherlands.

Strategic planning
Mayor Ferd Crone of the city of Leeuwarden, the Netherlands, who hosted the same conference last year, marked that most cities lack a proper water strategy as for many cities water has never has been an issue before.

According to Crone, fast urban expansion, growing water demand, and on top of that climate change, ‘demands a holistic approach based on strategy and action plans’. ‘There has to be a framework. But every city is different, so there is no blue print’, Crone remarked.

Crone also touched upon the financing and the fact that it is hard for urban water management to find funds: ‘A majority of water-related measures don’t pay back on the short term. It is about long-term investments to avoid future damage that would cost much more to repair’. 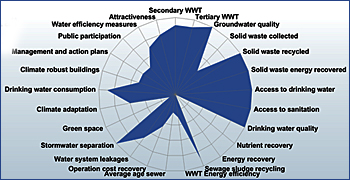 Illustrating the complexity and the many aspects of urban water management. This City Blue print of Porto shows the city is doing well on water supply but needs to replace its aging sewer network.

Tailored legislation for urban water
During the conference it was often mentioned that the current Water Framework Directive of the EU does not address the complex water issues that cities are facing.

Some speakers urged the European Commission to change the current EU water legislation to make it more workable in urban areas.

Others focused more on the EU’s policy for urban areas. As vice-mayor Mary-Ann Schreurs of the Dutch city of Eindhoven formulated: ‘Some things need to be organised to be able to provide a service, some things need more participatory and build on consensus.’

Schreurs invited the European Commission to join the cities in the development of an urban water agenda. ‘Be a direct partner. Let us develop a joint agenda and prevent every city to invent the wheel’. 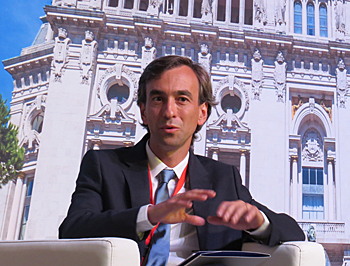 In the panel discussion, city councillor Filipe Araújo of the hosting city of Porto, told about the initiatives by his city to involve citizens in water issues.

Citizens involvement
According to city councillor Filipe Araújo of the hosting city of Porto, his city developed a strong bond with its citizens. The city opened a centre where the citizens can come and talk about the problems they encounter. Specific items are passed on to the innovation department where specialists and citizens together seek generic solutions. ‘We give citizens a lead in the creation of green and blue spaces in our city’, he said.

Mayor Rafal Dutkiewicz of the Polish town of Wroclaw noticed the changing attitude of the new generation. ‘They are more used to adapting to new technology and learning by doing. Besides, youth is generally more aware of environmental issues,’ the Polish mayor said.

Following the signing of the Porto declaration by the eighteen present cities, all other European cities were invited to sign the declaration as well.

The European office of International Council for Local Environmental Initiative (ICLEI) started a consultation on the Porto declaration. The consultation closes on 9 October.

Short video impression of the Mayors & Water Conference in Porto.