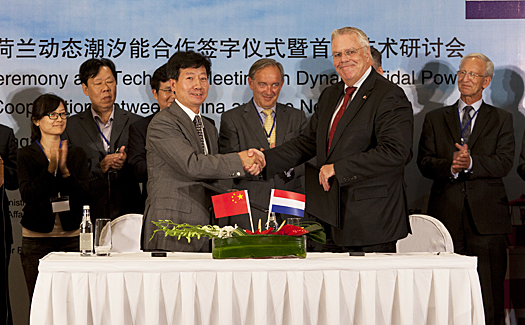 In an agreement between China and the Netherlands signed in Beijing on September 27, both countries have agreed on the joint development of an entirely new method to generate energy from the tides. The method, known as Dynamic Tidal Power (DTP), can potentially deliver clean and predictable energy for millions of homes.

Dam-like structure
DTP involves construction of a long dam-like structure of over 30 kilometers stretching out from the coast, long enough to influence tidal patterns and cause high and low tides to occur simultaneously on opposite sides of the dam.

A significant benefit of DTP, in contrast to traditional tidal power dams, is that it would not require enclosure of a basin, reducing environmental and social impacts.

Studies have shown that a large DTP dam along the Chinese coast could feature installed capacity of 15.000 MW or more, placing it among the world’s largest hydropower projects.

First feasability study
Before a full-size DTP power plant can be constructed, a lot of research, development and demonstrations are still required.

Peng Cheng, deputy Director-General of Hydropower and Water Resources Planning and Design General Institute: "A lot of work must be done to determine if Dynamic Tidal Power is a feasible option for China. We hope that a suitable demonstration project can be designed in the coming year or two."

"If that demonstration proves successful, we will have a solid basis from which to investigate the application of full-scale Dynamic Tidal Power", said Peng Cheng. 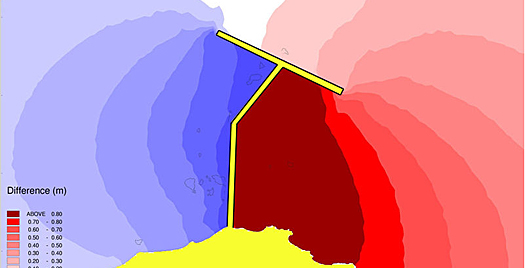 Consortium of Dutch and Chinese companies
The Netherlands government has awarded a subsidy to a consortium of Dutch companies to evaluate DTP with China. Participating in the Power consortium are Strukton Engineering, ARCADIS Nederland, Technische Universiteit Delft, Pentair Nijhuis, DNV KEMA, Oranjewoud, IMARES, en H2iD. The project budget is 2.1 million euro, running from 2012 to 2014.

Hans Moll, Director, Strukton Engineering, and Chairman of the Power consortium: "I am confident that these joint efforts will lead to DTP being demonstrated in the coming years, and that full-scale Dynamic Tidal Power will become a reality in the coming decade," .

Deployment of renewable energy
Liang Zhipeng, Deputy Director-General, Department of New and Renewable Energy, National Energy Administration of China: "The National Energy Administration is promoting the deployment of renewable energy across China and we want to harness the power of our seas. A careful investigation is needed to assess if Dynamic Tidal Power could be applied in China, and to further develop the technology."

Unique combination with Dutch waterworks technology
The signing of the agreement was coupled with a technical conference between experts from both countries. "In the dynamic tidal power project we see a unique combination of the Dutch waterworks technology with China's growing ambition and knowledge of renewable energy", commented mr. C. P. Buijink, Vice Minister of Ministry of Economic Affairs, Agriculture and Innovation of the Netherlands.

This news item was originally published on the website of Power DTP.