Dutch and Chinese researchers will discuss technical and economical details of the feasibility study on the development of the Dynamic Tidal Power (DTP) project by Power Group in China.

The feasibility study has entered its final phase and in the next few months it will become clear if it is possible to generate large amounts of tidal energy from a 30 km long dam-like structure of the Chinese coast.

High on political agenda
The project is high on the Dutch and Chinese political agenda. During his state visit to China in November, Dutch Prime Minister Mark Rutte discussed the project with Chinese Premier Li Keqiang .

The development of DTP is seen as a good example of cooperation between the two countries with regard to renewable energy . 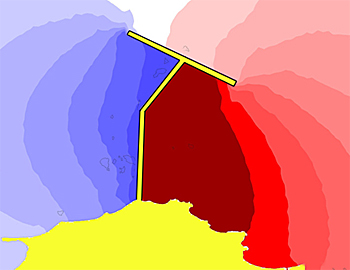 A DTP dam creates a significant difference in water levels on either side. Blue and dark red colors indicate low and high tides, respectively.

New development of tidal power
Dynamic Tidal Power (DTP) is an innovative way to use the natural tides for generating massive amounts of sustainable energy. A dam-like structure of at least 30 km in length with a large series of turbines is built perpendicular to the shore in a shallow sea basin. Such dam changes the long-wave dynamics of the tide in such a way that a head difference is created over the dam.

This hydraulic head is much more than the kinetic energy height, because of the acceleration forces which are inherent to tides.

Although the head remains relatively small (1-3 m), the discharge (m3/s) is enormous, leading to high installed power rates, in order of GW.

Feasible along Chinese, Korean and British coast
"Dynamic Tidal Power is a conceptually new technology for the development of tidal power. The generation of renewable energy can be combined with other functions extensively in coastal areas", said co-creator Rob Steijn of engineering firm Arcadis, one of the Dutch partners. "The development of DTP has the greatest chance of success in China , Korea and the United Kingdom, because of the physical conditions of the coastal zones and the high degree of energy needs in this country'."

Combination with other functions
A DTP dam can be combined with various other functions, such as coastal protection against waves and tsunamis, deep sea ports, aquaculture facilities, (controlled) land reclamation and connections between islands and the mainland.

This news item is based on a press release that was published on the website of Arcadis (Dutch only).