Dutch consultancy firm Witteveen+Bos is working with local and international partners on improving the environmental and landscape qualities of lake Boyuk Shor situated north of the city and the largest of nine lakes subject of study for remediation.

Ready before European games
The first phase of the remediation of lake Boyuk Shor is nearing completion, well in time for the European Games - the European version of the Olympic Games - which will be held for the first time in Baku in 2015.

During his visit president Aliyev reviewed the measures taken to improve water quality and clean up the lake beds and banks. The part of lake Boyuk Shor that can be seen from the European Games stadium has been thoroughly cleaned up.

The president was pleased with the milestones that were recently achieved.

Dredging and groundwater interception
The severely contaminated lake bed has been dredged, a storage facility for contaminated dredging spoil has been taken into operation, and dams have been constructed to isolate the project area from its surroundings. In the future, one of these dams will support the construction of an eight-lane motorway.

The area between the stadium and the lake has been beautified by constructing a park and a boulevard with an integrated groundwater interception system. 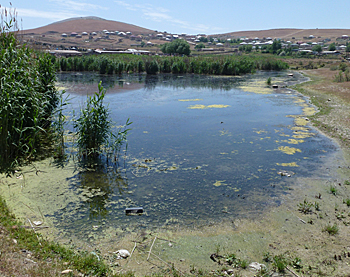 With the European Games on the agenda in June 2015, the Azerbaijani Ministry of Economic Development commissioned Witteveen+Bos in late 2013 to produce a design for the first phase: the remediation and beautification of Lake Boyuk Shor.

Discharge untreated waste water
Azerbaijan is a major oil producer, both onshore and offshore. In the past little attention was paid to environmentally responsible oil extraction methods, resulting in severe pollution in and around the lakes in the Baku area. There also were other problems: the discharge of untreated sewage and the dumping of waste in and around the lakes.

These problems are also addressed in the Witteveen+Bos project.

The lake rehabilitation projects are initiated by the Ministry of Economy and Industry and coordinated by the executive organization Tamiz Shahar, which means clean city.