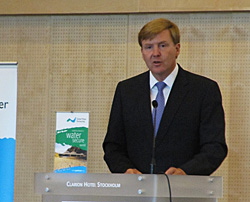 Modern water technology was a recurring theme of a lecture the Dutch Prince of Orange gave in Stockholm on Augusts 20, commemorating the 15th anniversary of the Global Water Partnership. The prince addressed the biggest water problems of this moment, emphasizing sanitation and agriculture. More than once he mentioned water reuse as a necessary solution. Cascading should be the essence of 21st century water systems, the prince told his audience.

Key water items for Rio 20+
The Global Water Partnership celebrated it’s 15th anniversary at the Stockholm Water Week. The Prince of Orange is the patron of the GWP and was invited to deliver this year’s annual lecture. In his noticeable lecture he focused on sanitation, innovation in wastewater management, water efficiency in agriculture to ensure both water security and food security. All items that the GWP works on and, according to the prince, should be addressed at the UN world summit Rio 20+ on sustainable development in June 2012.

Affordable sanitation
To achieve water security, business as usual is not enough and the prince urged to increase the world’s efforts on sanitation. He specially mentioned the Bill and Melinda Gates foundation that invited 22 universities to submit proposals for how to invent a waterless, hygienic toilet that is safe and affordable for people in the developing world and does not have to be connected to a sewer. The target is to operate these units at less than 5 dollar cents per person per day, the prince told.

Cascading down to grey water
According to the prince 21st century water systems should employ cascading use - cleaning water for drinking and personal hygiene, cascading down to grey water which can be 'cleaned enough' for industrial use, environmental recharge or agricultural. “Do you know that about 50 million hectares of agriculture currently depends on wastewater? We have to expand this practice while doing it better by promoting the guidelines of WHO for the safe use of wastewater, excreta and grey water in agriculture”, told the prince.

As big as necessary
He urged to take advantage of the triple benefit afforded by building wastewater systems that save energy, lower construction costs, and harvest nutrients.” We need more affordable systems adapted to local conditions that are as small as possible and as big as necessary. For example, small-scale aerobic ponds, with bio-digesters that allow for biogas recovery, not only remove deadly pathogens from water, they produce affordable fuel which can be used for cooking and safe, cheap fertilizer.”

Read the complete lecture by the Prince of Orange on
the website of the Royal Dutch Family.