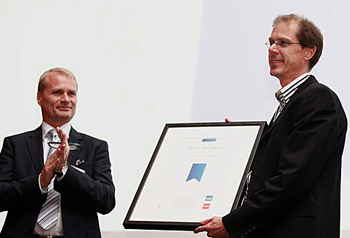 Professor Arjen Hoekstra of the University of Twente has received the Baltic Sea Award. He was awarded for his research on the Water Footprint. This is an indicator of water use that looks at both direct and indirect water use of a consumer or producer.

The ceremony took place in Gdansk (Poland), during the annual summit of the Baltic Development Forum and the second annual forum on the EU Strategy for the Baltic Sea region by the European Commission.

It is the first time that this award is presented to anyone outside the Baltic Sea region. Earlier prize winners include the President of Finland. To award a sum of 5000 euros linked. The Baltic Sea Award is awarded alternately to politicians, businessmen and scientists. Of the jury include the Prime Minister of Poland Donald Tusk.

Extraordinary tool for the region
The Water Footprint can give an indication of the water consumed in e.g. agriculture, industry and households. Although the water footprint is not specific to the Baltic Sea region, the concept is seen as an extraordinary and very interesting for the area.

Improvement of the water quality
The Baltic Sea Region covers Northern Europe, including Iceland, northern Germany and part of Russia. The region is a stronger profile in the world, especially in terms of sustainability.

The Baltic Sea is one of the most polluted waters in the world. This is mainly due to excessive use of nutrients in agriculture and inadequate treatment of waste water in households and industry. The rivers carry the pollution to the sea. The Baltic Sea Region will use the Water Footprint to improve this situation.