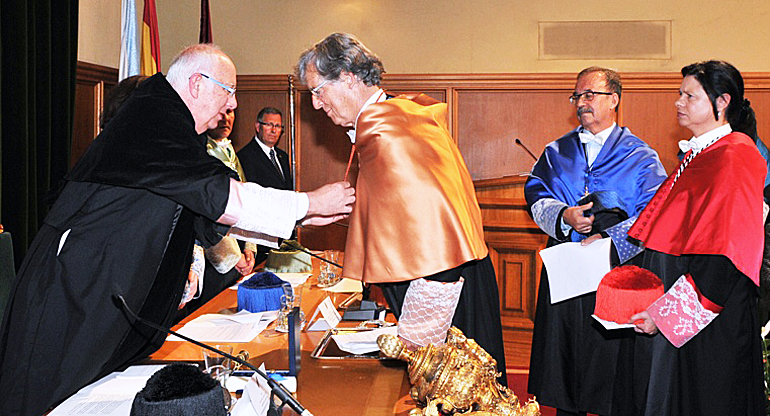 The ceremony took place at the university as part of the programme of the 13th World Congress on Anaerobic Digestion held in Santiago de Compostela, Spain.

Very successful UASB water treatment technology
Former Dutch professor Gatze Lettinga was honoured 'doutor honoris causa' for his contribution to the development of anaerobic technology, especially as architect of the Upflow anaerobic sludge blanket (UASB)-technology of which today 3,000 reactors are worldwide in use for treatment of industrial and municipal waste water. 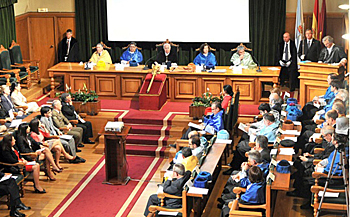 During his 30-year carrier as professor at the Wageningen University, Lettinga supervised many students and teachers of the department Environmental Engineering and department Bioprocesses of the University of Santiago de Compostela.

Pionering with micro-organisms
Professor Lettinga pioneered the widespread use of anaerobic technology, which uses micro-organisms in an oxygen-free environment to purify used water.

Although anaerobic technology has been around for over a hundred years, his invention proved that it could be operated as an energy-efficient, cost-effective and self-sustaining process.

The UASB anaerobic reactor is able to pre-treat polluted used water from industries such as breweries, beverage, paper and pulp manufacturing, sugar, starch and alcohol distilleries.

The used waters produced by these industries contain a large amount of organic contaminants. Some of these contaminants cannot be efficiently removed by conventional aerobic processes, while others are toxic.

Prestigious awards
Lettinga received many awards for his pioneering achievements. The most prestigious were the 2007 Tyler Prize (USA), one of the largest international awards in the field of environment, and the 2009 Lee Kuan Yew Water Prize (Singapore) for honouring outstanding contributions solving the world’s water problems.

This item is based on the news release on the website of University of Santiago de Compostela (in Spanish).

Interview with professor Gatze Lettinga on the occasion of being nominated for the 2009 Lee Kuan Yew Water.