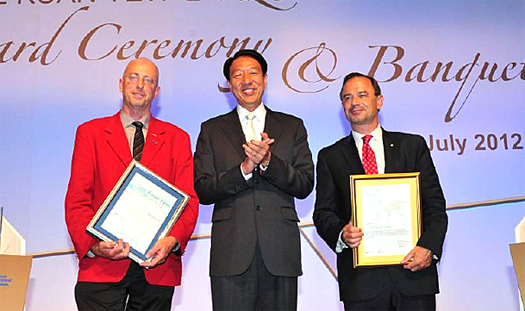 The ceremony was graced by Teo Chee Hean, Deputy Prime Minister, Singapore (middle). More than 800 guests gathered to honour the achievements of this year’s prize-winners.

Red coloured jacket
Sporting a red jacket to, he said, match the colour of the Anammox bacteria, professor Van Loosdrecht thanked the many people that have supported him in his work. He noted that he is the second Dutch person in five years to win the Water Prize and credited this to the way that wastewater research is approached by Stowa (the foundation of the Dutch water boards for applied research), which represents the country’s various water boards. "They have time for implementing new technologies, collaborating with universities and making links with companies. This helps not only with the scientific research, but also with bringing things into practice", he said.

Short cut nitrogen cycle
Professor Mark van Loosdrecht of Delft University of Technology in the Netherlands received the Lee Kuan Yew Water Prize 2012 for his development of Anammox, an innovative biological process to remove pollutants from used water. The process uses bacteria to convert the pollutant ammonia into harmless nitrogen in what is essentially a short-cut of the natural nitrogen cycle. This short-cut means that less energy is required to complete the cycle, offering water utilities a costeffective, low-energy and sustainable means to treat waste water.

Anammox pilot in Singapore
Professor Lim Pin, Deputy Chair of the Lee Kuan Yew Water Prize Council, noted that Singapore is currentlly conducting a pilot trial of a variant of the Anammox process at one of its water reclamation plants. "This has shown positive results, and the national water agency, PUB, is currently looking into the adoption of this technology to improve energy efficiency."

Innovative new parks
The 2nd Lee Kuan Yew World City Prize, awarded every two years, was presented to Adrian Benepe, New York City’s commissioner of Parks and Recreation, who accepted it on behalf of Mayor Michael Bloomberg and the Departments of Transportation, City Planning, and Parks and Recreation. New York City was recognised for its achievements in sustainable development; in particular, its efforts to rejuvenate neglected public spacesthrough the creation of innovative new parks such as the High Line and Brooklyn Bridge Park.