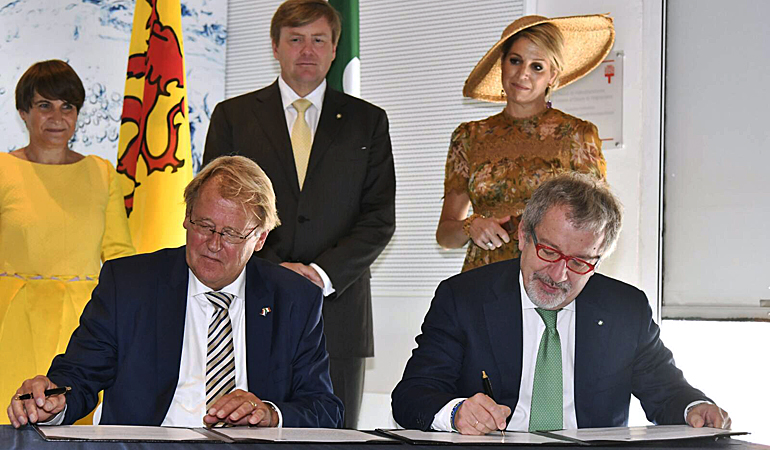 The Dutch province of Zuid-Holland and the Italian Lombardy region signed a Memorandum of Understanding (MoU) to intensify their cooperation on water innovation, sustainable agriculture and circular economy.

Two years ago both provinces initiated a cooperation on climate change and water management. Now the cooperation will be expanded to more wider water related issues, such as sustainable farming.

The MoU was signed at the art museum Triennale di Milano on 23 June by the governor of Lombardy, Roberto Maroni (on top photo right), and the King's advisor of Zuid-Holland, Jaap Smit (left), in the presence of the Dutch Royal couple King Willem-Alexander and Queen Máxima.

The signing ceremony was part of a Dutch trade mission to Italy, and a State visit by the Royal couple. 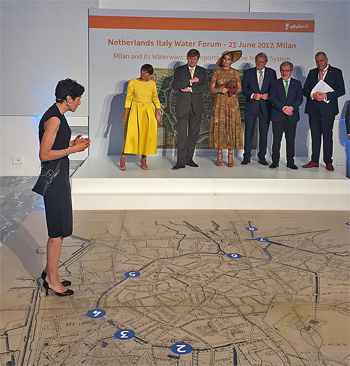 At the Dutch-Italian Water Forum a map was shown of Milan and its old system of waterways, the Naviligy, that has been designed by Leonardo da Vinci. Milan is currently working on a restoration plan.

Pilot projects on water management
Since the International Water Day event during the World Expo 2015, the province of Zuid-Holland and the Lombardy region have been working together in various European projects within the water sector.

During the last two years several meetings have been held on water issues between official representations of the province of Zuid-Holland and the Lombardy region, business and knowledge institutions.

Both regional authorities decided to expand this water cooperation and announced the launch of water management pilot projects, involving Dutch cities such as Drechtsteden and Rotterdam.

Sustainable farming
Lack of water is a serious issue for the agriculture in Lombardy region, as well as the handling of manure. Both regions have now agreed to seek more cooperation and exchange knowledge on sustainable farming.

Issues as achieving higher crop yields with less water and better nutrient management, are high on the joint agenda.

Both regions agreed on the development of joint projects financed by European funds.

This news item is based on releases on the websites of the Lombardy's environment councilor Claudia Terzi (in Italian), Province of South Holland (in Dutch) and Regione Lombardia (In Italian).

More information
Province of Zuid-Holland
The Hague, the Netherlands
+31 70 441 66 11
www.zuid-holland.nl