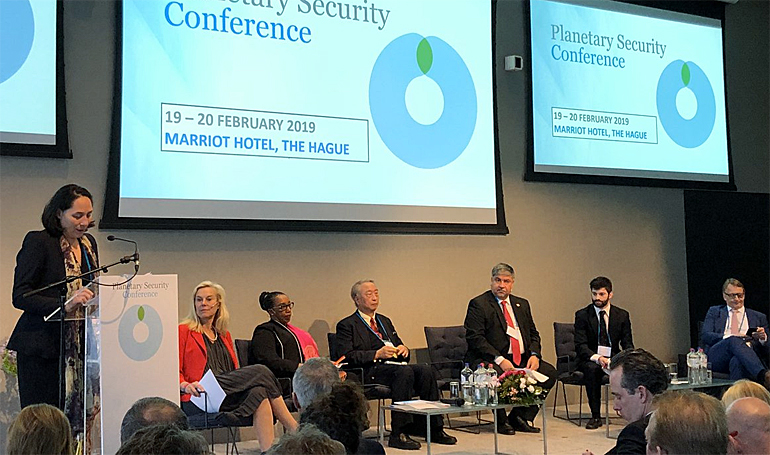 "We never had so much data at our disposal for predictive models and risk analyses, which is making us so much better at understanding and predicting outcomes and risks, said Dutch Minister of Foreign Affairs Stef Blok at the closure of the 4th Planetary Security Conference in The Hague, the Netherlands on 20 February.

The conference built new momentum to get the ‘hard’ military community and the ‘green’ climate community together to de-risk conflicts and prevent new conflicts to break out.

Stakeholders from four hotspot regions – Mali, Iraq, Lake Chad and the Caribbean - that have been selected by the Planetary Security Initiative (PSI), had come to The Hague and discussed their progress decreasing the tension, in numerous sessions with military, diplomats, scientists and climate experts. 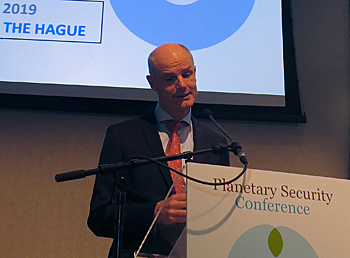 Dutch Minister of Foreign Affairs, Stef Blok, spoke of the need for early warning systems to be able to intervene in time and prevent conflicts.

Early warning, early action
Minister Blok stressed the need for early warning and early action. He specially mentioned the development of a new early-warning tool that is currently being tested in Mali.

"By using big data and local input, they will be able to predict where a mix of water stress and political, economic and social factors can lead to conflict", said Dutch minister Blok.

"Prevention, of course, is always better than cure. But we can’t avert every disaster. So we do need to improve preparedness and resilience as well".

Blok also mentioned the progress at Lake Chad where a group of experts from inside and outside the region has been drafting a roadmap for action to improve the lives of the people living in this region.

The roadmap covers very practical and meaningful issues, such as access to markets, water management and basic services. 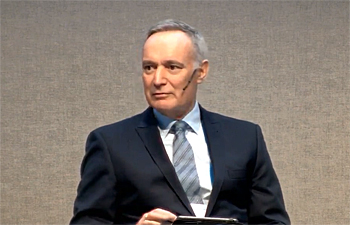 Former Dutch chief of staff Tom Middendorp, known as the green general, who will chair a new network of senior military leaders on climate and security.

Green general
A new International Military Council on Climate and Security (IMCCS) was announced at the conference. Tom Middendorp, former Chief of Defence for the Netherlands, will chair this standing network of senior military leaders that will produce an annual World Climate and Security Report.

Middendorp told he had become known as the ‘green general’, following his interventions to declare climate change a threat to global security.

His ideas on the linkage between climate change and security is based on experiences from the war in Afghanistan.

He recalled a hard-won battle to take over territory controlled by the Taliban during a stint in Afghanistan. The US-led coalition forces won, only to watch the territory taken back by the Taliban soon thereafter.

"It took us a year to figure out what the problem was – a fight between groups over water." he said. "We brought water engineers and solved the problem. And the Taliban left." 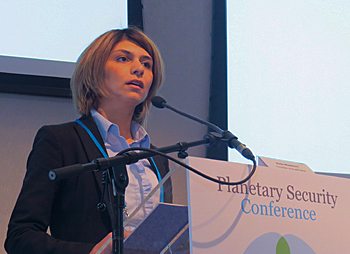 Nada Majdalani of EcoPeace talked about a bold water-energy plan crossing borders between Palestine, Jordan and Israel. She invited the private sector to step in.

In return, the plan foresees Jordan to build large solar stations and deliver electricity to Israel.

Majdalani invited the private sector to step in. "We are studying five locations to cross the border and we want to proof the concept in a pilot to show the barriers between the countries can be over won."
Her organisation made some calculations, showing there is a good business case. 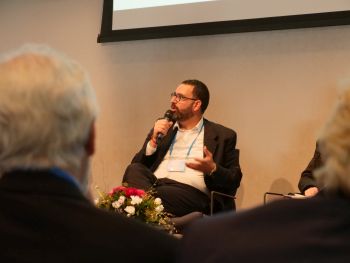 Ramy Boujawdeh, deputy general manager of Berytech advocated to moblize the private sector as it bring in the necessary change.

The private sector is already involved in the Middle East but only in activities without financial risks.

According to Ramy Boujawdeh, deputy general manager of Berytech, a Lebanese initiative that provides support and growth to innovative and passionate entrepreneurs, solutions are far from easy as water and crises are tightly connected.

"The position of the government is quite weak so donors often work directly with NGOs", Boujawdeh continued. "It is essential to make the connection with the private sector. It is my firm belief that in our region, the private sector must be involved in mobilising change to reduce the risk of an even bigger water crisis".

Read an extensive report on the whole conference on the website of PSI.

Introduction of the Water, Peace and Security Partnership that is designing new tools and services to identify water shortage-related security risks.