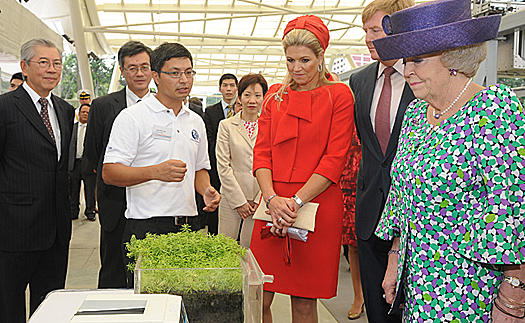 Queen Beatrix of the Netherlands, accompanied by the Prince of Orange and Princess Máxima, visited the Singapore-Delft Water Alliance (SDWA) and NUSDeltares on 25 January during her first state visit to Singapore.

Joint water-releated research programme
Singapore and the Netherlands are global leaders in sustainable water management. The two countries' complementary strengths in water form the basis for synergistic cooperation, spawning a series of water-related research programmes and projects that have been successfully conducted between NUS and its partners in the Netherlands over the past six years through strategic alliances such as SDWA and NUSDeltares.

After the unveiling of the 'Van Kleef Centre', Mr Wong Ngit Liong, Chairman of
National University of Singapore’s Board of Trustees, presented a gift to His Royal Highness the Prince of Orange.

Urban water cycle
SDWA research is centered on the interaction of natural and urban environments embracing water supply systems and the urban water cycle as a core of their research activities. Building on the achievements of SDWA, a new alliance NUSDeltares was established in 2012, with the intention to bring scientific impact to address societal needs in South-east Asia.

Building with nature
The visit was hosted at the NUS Aquatic Science Centre (ASC), which is managed by SDWA, where researchers showcased cutting-edge research work on urban water management and water sensitive urban design, as well as building with nature for inland and coastal water systems.

The ASC is also used for training, knowledge sharing and public outreach. 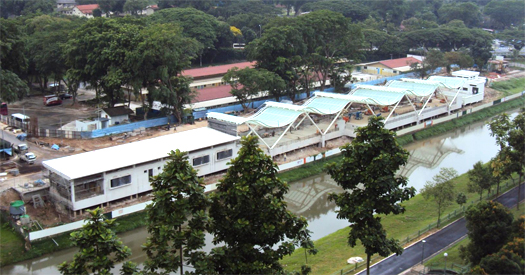 Aerial view of the NUS Aquatic Science Centre in Singapore

Dutchman Van Kleef donated aquarium
Professor Tan Eng Chye, Acting NUS President, said: "NUS is deeply honoured to welcome Her Majesty Queen Beatrix of the Netherlands and Their Royal Highnesses and delegation to the ASC, a focal point for many cutting-edge water research projects involving NUS and our Dutch partners under the auspices of the SDWA and NUSDeltares. We are also privileged to rename our water research facility as a tribute to Mr Karel Willem Benjamin van Kleef, who is best remembered for bequeathing his wealth for the construction of the Van Kleef Aquarium, which introduced earlier generations of Singaporeans to the wonders of marine and freshwater life."

"Since the Van Kleef Aquarium was demolished in 1996, there is no longer any memorial to Mr Van Kleef's generous gift to the people of Singapore. We are delighted that Professor Tommy Koh led an initiative to rename the physical facility housing the ASC after Mr Van Kleef, so that his spirit of generosity could live on through this NUS research facility bearing his name."

Associate Professor Vladan Babovic, Director of SDWA, said, "The ASC, which is dedicated to the development of sustainable solutions to urban freshwater management, serves as an important platform to promote research partnerships between Singapore and the Netherlands. The Van Kleef Centre, which houses the ASC, will be an icon that symbolises the long-lasting friendship between the two countries."

About Mr Karel Willem Benjamin van Kleef
Mr Karel Willem Benjamin van Kleef was a Dutchman who resided in Singapore in the 19th and early 20th century. As a broker, a commission agent and a certified expert in mine drilling, he made a considerable fortune in property and stock in both Holland and Singapore. Upon his death, he donated his wealth to the Municipal Government of Singapore. The gift was eventually used to construct the Van Kleef Aquarium, Singapore's first aquarium, which was opened in September 1955. The Van Kleef Aquarium was eventually demolished in 1998.

About Singapore-Dutch Water Alliance
Singapore-Delft Water Alliance (SDWA) is multi-national, interdisciplinary research Centre of Excellence for Water Knowledge involving PUB (Singapore), National University of Singapore and Deltares (The Netherlands), established through an initiative of the National Research Foundation in Singapore.

SDWA is hosted by National University of Singapore and provides research home to scientists and engineers from all partner organizations.