What are you looking for?
News 8 September 2017 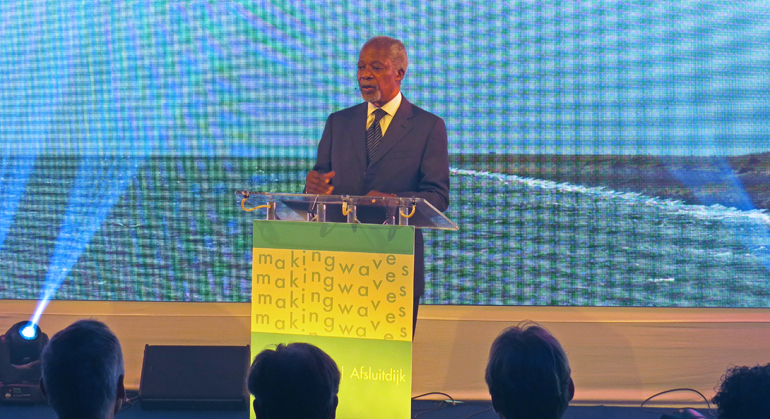 Designer Fien Dekker won the public award with her eye-catching designed permeable street tile at the innovation event Making Waves. The event took place at the Afsluitdijk closure dam, the Netherlands, on 7 September.

The innovation event was initiated by two Dutch ministries to create a platform for the innovators on water issues in relation to energy, food, health and transportation. 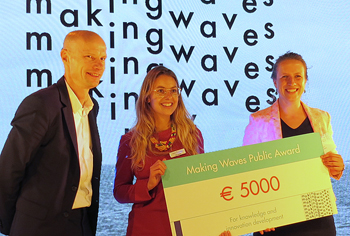 Special permeably street tile
The Rain(a)way tile, invented and designed by Fien Dekker, ensures that the rainwater is captured above the ground. This helps to reduce the pressure on the sewerage system.

On several locations in the Netherlands the Rain(a)way tile has been integrated in urban pavements. In Rotterdam and Amsterdam the application of the special tile is part of the city’s climate adaptation programmes to capture rainwater at the source, hold it there visible to the eye, and subsequently let it slowly seep into the ground.

In her pitch at the Making Wave event, Dekker told that she had been inspired by Japanese architecture, which she feels adds ‘charm and visibility’ to water collection: every shower of rain creates tiny little rivers that turn the public space into a delightful landscape. 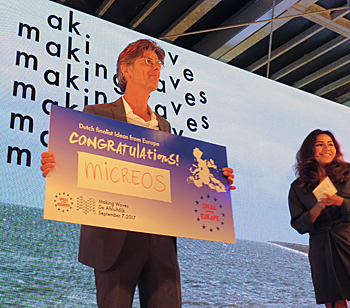 The overall winning pitch was by Mark Offerhaus of Micreos as inventor of a new technology that kills only ´bad´ bacteria.

The jury praised the innovation because of the enormous impact it may have on healthcare in combating bacterial diseases when it is available worldwide.

The event took place in the middle of the 32 km long closure dam Afsluitdijk. ‘I can’t think of a more symbolic and inspirational location to promote innovative solutions around water, food and energy than the iconic Afsluitdijk’, said Kofi Annan in his key note.

Annan referred to several cross-sectoral innovations that are currently piloted on the dam. This includes the Blue Energy factory that produces electricity using the different salinity of the fresh water on one side of the dam and the salt water on the other side.

Another innovation on the closure dam is piloted by Tocardos that operates an array of special designed turbines that capture energy from the tidal water flows. 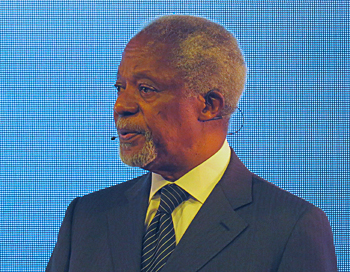 Acceleration of innovations
Annan also addressed the importance of innovations for achieving the United Nations Sustainable Development Goals (SDGs) by 2030 and the Paris climate agreement. He emphasized the opportunity to accelerate the introduction of clean technology. According to him, the pilot project on the Afsluitdijk shows that technology is already at hand.

Annan called on climate change to be a connecting element and to see it as a challenge to reach a more prosperous and sustainable world for all. It's not just governments and politicians", said Annan. ‘Inventors with good ideas can also contribute’. 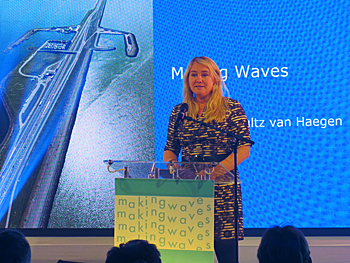 ‘Water and the big challenges associated with it’, said minister Schultz van Haegen, ‘are not just an issue for water or climate ministers who want to help countries with problems.’

‘Water is crucial to international stability, which also makes it a matter for ministers of defence and foreign affairs, prime ministers and presidents’, Schultz said.

The Dutch minister urged ministers not only to focus on how to stop migration by creating a defense ring around Europe. ‘They should also be concerned with projects that make the regions more climate resilient’.

Video of the award ceremony.