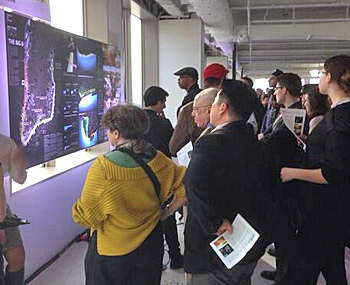 The presentation is a next stage in the Rebuild by Design contest that was initiated last year by the Hurricane Sandy Rebuilding Task Force. Director of the contest is Henk Ovink, former director general at the Dutch ministry of Infrastructure and environment, now added to the staff of State secretary of housing and urban development, Shaun Donovan.

The contest started last summer with 150 international submissions. In November ten teams were selected and asked to further develop their ideas in close cooperation with local and regional stakeholders and design approaches to improve the resiliency of waterfront communities.

An international jury will judge the 10 final design proposals and the winning teams will be announced later this spring.

Spur innovations by public-private partnerships
"This competition has resulted in forward-thinking, comprehensive proposals to make the region more environmentally and economically resilient," said State secretary Shaun Donovan. "Climate change is presenting unprecedented threats to communities across the country. Rebuild by Design is a model for how we can use public-private partnerships to spur innovation, protect our communities from the effects of climate change, and inspire action in cities across the world." 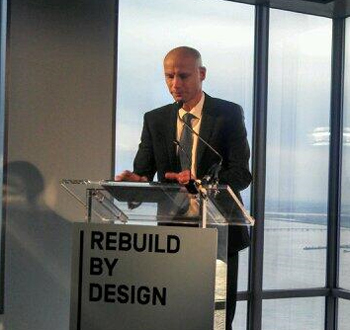 Bridging science and politics
"Understanding what really is at stake and what happened during hurricane Sandy informs a path forward that can reconnect the social, the economy and the ecology," said Henk Ovink (photo left), Principal of Rebuild by Design. "Design can bridge these gaps and marry science and politics, the real world with imagination. Rebuild by Design is not about making a plan, but about changing a culture."

The competition is one of the initiatives of President Obama's Hurricane Sandy Rebuilding Task Force. It has taken place in partnership with the Municipal Art Society, NYU's Institute for Public Knowledge, Regional Plan Association, and Van Alen Institute.

This team, with Danish architect Bjarke Ingels, connects Manhattan’s shoreline parks to upland streets. In some areas, metal flood barriers drop down from the elevated highway and fold up again when the waters recede.
Dutch participant: One Architecture

The MIT team envisions a landscape that combines a marshy park and berms - meadowlands - to protect drier areas of New Jersey and open them up for development, so that spending some money would generate more.
Dutch participants: ZUS, Urbanisten, Deltares, 75B and Volker Infra Design

WB Unabridged offers the bird’s eye view of a sea-level problem in Bridgeport, where rivers meet the coastline. The team developed an integrated lines of resilience, braiding together transportation, barriers, disaster shelters, and zones of future development.
Dutch participant: Arcadis

New York-based architecture firm WXY and Dutch landscape architecture firm West 8 teamed up to produce the simplest but most colossal of the ten projects: barricade the mainland behind a chain of artificial islands.
Dutch participant: West 8

This news item is based on the press release published on the website of U.S. Department of Housing and Urban Development (HUD).