Red Cross’ Climate Centre welcomes the statement by the UN Security Council recognising the impact of climate change on West Africa and the Sahel region, including ‘drought, desertification, land degradation and food insecurity,’ and the call for strategies by governments and the UN to manage associated risks.

A statement read by the council president Kairat Umarov was adopted on 31 January, centred on the consolidation of peace in West Africa, expressed ‘concern over the overall humanitarian situation in the region’. 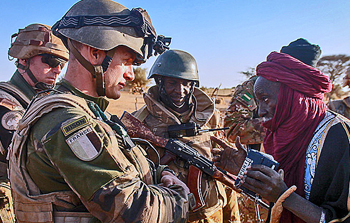 UN recognises that drought plays an important role in conflicts and migration  in Sahel countries.

‘Conflicts in the Lake Chad region and Mali, combined with the activities of armed groups across borders, had serious consequences for neighbouring Burkina Faso and Mauritania’, said Patrick Youssef, the ICRC’s Deputy Director for Africa.

‘The region’s challenges are exacerbated by climate change, poverty and food shortages’, he added.

The ICRC is helping more than 1.5 million people in these five countries by providing seeds, tools, fertilizers, fodder and animal vaccinations. 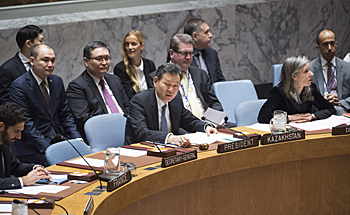 UN Security Council adopted the statement on the critical situation in the Sahel on the last day of the council’s presidency by Kazakhstan.

Fitting all pieces together
Climate Centre Director Maarten van Aalst also welcomed the UN references to humanitarian innovations to address rising risks, saying discussions under the Paris Agreement, on the SDGs, in the Security Council, and in humanitarian forums all now overlapped.

‘We cannot close our eyes to the fact that people in fragile and conflict-affected countries are also the most vulnerable to rising climate-risks’, said Van Aalst.

‘This cannot be solved simply as a climate problem, a security problem, or even a question of humanitarian response – we have to fit the pieces together.”

New approach on peace
In reaction to the adaption of the statement Swedish Foreign Minister Margot Wallström tweeted that it was ‘an important step’; contemporary challenges to peace and security required new approaches, she argued, and in recognizing the adverse effects of climate change the council was also illustrating the ‘need to tackle root causes of crises’.

Netherlands Climate Envoy Marcel Beukeboom tweeted that for the Security Council to link climate change and security was a ‘significant step’, and something the Netherlands had argued for through – among other channels – the Planetary Security initiative. 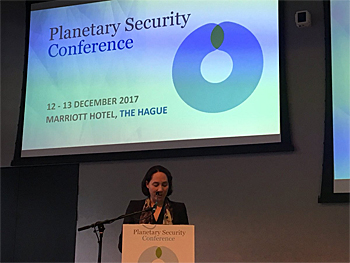 PSI-conference in The Hague in December 2017 addressed the effects of climate change as one of the root causes for conflicts.

Bridging knowledge and policy
The Planetary Security Initiative (PSI) is a multi-year initiative run by a consortium of think tanks, including the Center for Climate and Security, to strengthen the knowledge-policy interface on global security. The consortium and the community of practice is coordinated by Dutch-based research institute Clingendael.

In December last year the imitative held a conference in The Hague, the Netherlands, where forty high level representatives signed a declaration that calls for a special UN ‘climate security’ envoy for the coordination on international migration issues by addressing the effects of climate change such as water scarcity.

In March, the Netherlands will chair the UN Security council and will have the issue of a special envoy for climate security high on its agenda.

This news item was originally published on the website of ICRC Climate Centre.

Read also on this website
● SNV and ACF join in EU-funded projects to halt migration in Northern Cameroon, 19 December 2017
● High level representatives sign The Hague Declaration for concerted action on climate security, 13 December 2017
● Stockholm World Water Week 2017: Many reasons for conflicts, water shortage is one of them, 30 August 2017