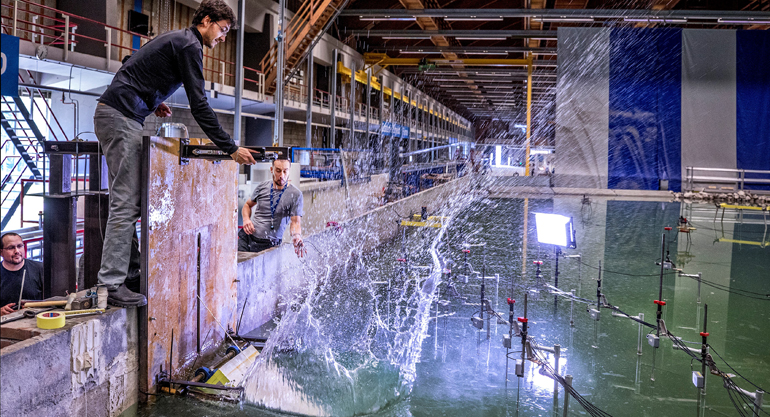 A consortium of researchers from England, Switzerland, Germany, Austria and the Netherlands started a study at research institute Deltares, Delft, the Netherlands to model and quantify the wave features caused by falling ice masses.

The simulation of ice-tsunamis will last three weeks and is led by Dr. Valentin Heller of the University of Nottingham, UK.

The study is conducted as part of Hydralab+, an EU-funded infrastructure network for experimental research institutions in the field of environmental hydraulics and hydrodynamics. 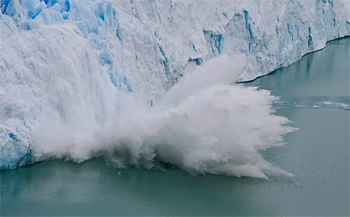 Larges splashes and waves
Ice masses falling or overturning into large water bodies can generate tsunamis in the Arctic and Greenland, as well as in large lakes in mountainous regions.

The waves and splashes caused by these events can be over tens of metres high, posing a considerable hazard for the local community, the fishing industry, the oil and gas industry, and tourists.

Dr. Valentin Heller explains: ‘Examples in Greenland, such as a fifty-metre-high wave at the outlet glacier Eqip Sermia in 2014, and a tragic event in 1995 that resulted in 58 casualties, show how important it is to study this type of tsunami.’ 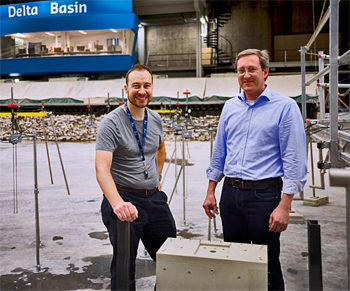 Different wave characteristics
‘Research in this area is currently very limited’, Heller continues. ‘This unique large-scale testing at Deltares should allow us to determine the characteristics of the tsunami waves, such as height, decay with distance, as functions of both the size of the ice mass and how it interacts with the surrounding water.

Heller expects that the outcomes of the study will provide direct support for hazard assessments and provide valuable data for the calibration and validation of ongoing numerical simulations.

3D research
The tests will be performed at Deltares’ three-dimensional Delta Basin. This represents these events much better than tests in flumes (2D), because waves of this kind are mainly generated in open water bodies.

Guido Wolters, Deltares project leader: ‘Thirty-five gauges will be placed in a semi-circle around a dedicated release structure for two ice blocks in our Delta Basin in order to measure the tsunamis. The results will be linked to existing data about landslide tsunamis and rockfalls, and used to improve numerical tsunami simulations.’

This news item was originally published on the website of Deltares (in Dutch only).