A team of researchers and students from TU Delft university of technology started a large scale tracer project to chart the flow of the Irrawaddy, Myanmar.

The team uses 15 specially-made GPS trackers and 400 balloons with LED lights to collect data on the variations in the flow rate of the river. 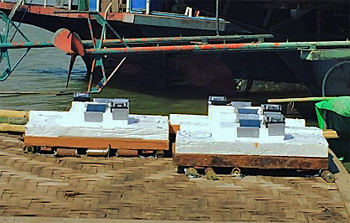 Unique GPS tracker
Off-the-shelf GPS beacons are expensive, or lack GSM capabilities. So Delft university of technology, together with the startup Disdro, developed a GPS tracker that records its position on a local SD card every minute, calls in its position every 15 minutes and transmits its location.

As a result, it is also possible to relocate these trackers.

The balloons are low-tech floats with LED-lights. They have different colours, and will be released at various places in the river at established times. 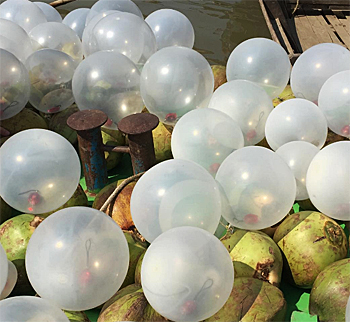 Balloons with LED-lights connected to coconuts that float with the stream of the river.

Calibration of models
The research team will follow the trackers and balloons for several hundred kilometres over a course of several days.

The number of balloons will also be counted manually from a bridge every 50 to 70 kilometres.

The data is vital to predict future concerns such as fairway (channel) relocation and the spread of contamination.

It will also be used to calibrate a model of the river’s hydraulics and water quality.

The team also plans to use the data to determine the extent to which collecting information on water quality via citizen science can serve as a monitoring system.

This news item was originally published on the website of Delft university of technology.