The Netherlands has officially commissioned eight new dwelling mounds, offering a 6 m elevated yard for relocated dairy farmers in the Overdiepse polder, along the river Meuse.

The oldest form of civil engineering for flood protection has revived in the low country. The concept of elevated mounds was abandoned in the Netherlands some thousand years ago when the first levees appeared.

On 9 September the redevelopment of the Overdiepse polder was officially completed. "We are ready. Let the water come", said one the dairy farmer Nol Hooijmaijers on the occasion of the commissioning ceremony.

On the riverside of the polder the levee has been lowered 3 meter and the polder is expected to flood once in 25 years. 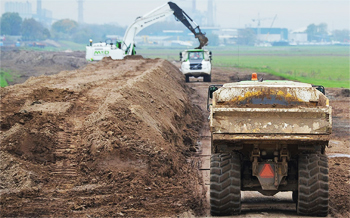 The existing river levee has been lowered 3 m so it overtops during extreme high water levels and the polder can act as a retention area.

New era in river flood management
It took a group of dairy farmers in the Overdiepse polder to break with the world famous Dutch tradition of building levees.

Following severe river floods in 1993 and 1995 the Dutch water authorities considered new measures and realized that it was no option to keep raising levees forever. Besides, a breach in a high levee can be deathlier for people living nearby, than a low one.

A new era in Dutch river flood management started in 2005 with the 2.3 billion euro Room for the river programme, comprising 30 projects to remove bottle necks and widen the flow of large rivers, instead of raising the levees. One of the projects in this programme was the Overdiepse polder.

Next year all but one of the Room for the river projects will also be finished. 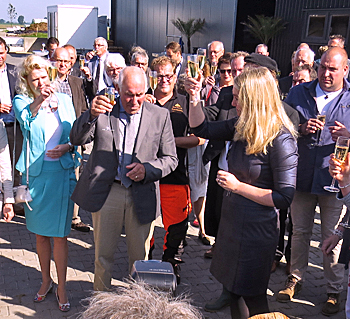 Good example of stakeholder participation
Initially it was planned to fully abandon the 550 ha Overdiepse polder and turn it into a flood retention area.

However, the 17 dairy farmers that lived in the polder came up with an alternative plan suggesting to rebuild their farms on mounds.

This way the river level can be lowered by letting the water flow through the polder, without damaging the farms.

All authorities, at national, regional and local levels, sat around the table with the farmers and discussed this idea and finally a complete new plan was adopted, comprising a string of eight 6 m high mounds attached to the levee (see on right side of top photo).

Dutch minister Melanie Schultz van Haegen of Infrastructure and the Environment was present at the ceremony and she praised the residents and the local authorities for their cooperation. "This project proves that stakeholder consultation leads to the best result. These mounds allow the dairy farmers to continue their business and at the same time they are protected against floods."

Dream come through
Hooijmaijers admitted that it had not always been easy. "It was not without a struggle to come to an agreement. But we succeeded and today a dream has come through."

The redevelopment of the Overdiepse polder has become a world-renowned example of stakeholder participation. TV-stations as Al Jazeera, BBC and New York Times have broadcasted interviews with Hooijmaijers on how the farmer's plan has been realized. 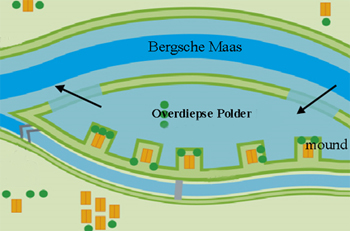 In case the polder floods, the water authorities are committed to drain out the water within six weeks for farmers to use their meadows again.

New kind of river management
Water management expert Piet Dircke of consultancy firm Arcadis was involved in the initial phase of the project. Since the flooding in New Orleans in 2005 Dircke has been travelling around the globe to advocate not to wait for flood disasters but take preventive measures.

When he tells of the Overdiepse polder and the concept of Room for the river he notices there is a wide international interest.

Livable neighborhoods
"Widening of rivers is a firm statement for a new kind of river management", he believes. Countries as Korea and Polen have also developed similar river programmes.

Dircke finally: "Although no river is the same, the idea to widen rivers and making them attractive again is gaining followers. Take for instant the LA river. The city of Los Angeles wants to create more space for the river and turn it into a string of open space. River restoration provides them an opportunity to make neighborhoods more livable."

History of the Overdiepse polder (2013)