Three days remain for German professor Andreas Fath to complete the 1,231 km marathon swim along the Rhine river from the Swiss Alpes to the North Sea. Fath crossed the Dutch-German border on 21 August, making his first stop in the Netherlands.

Fath is expected to complete his Rhine Swim in the North Sea on 24 August.

The event aims to raise awareness for the importance of water as a resource and the need for increased water protection. 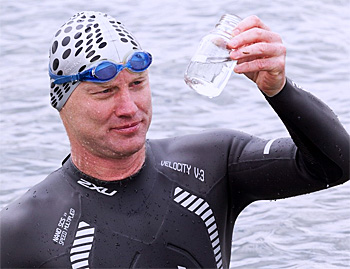 Sport, research and awareness
Andreas Fath (49) is a long-distance swimmer and chemistry professor at the Hochschule Furtwangen University (HFU) in Furthwangen, Germany.

From the source of the Rhine in Switserland, to its mouth in the North Sea, Fath examines the water quality.

The chemistry professor will present the detailed results at a water symposium in November. 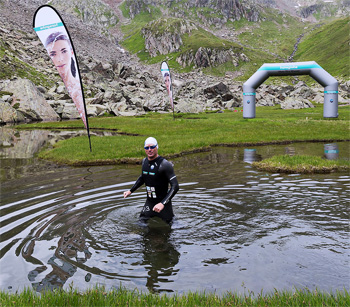 Fath started his Rhine swim in the Tomasee, Switserland on 28 July.

Water expertise
An interdisciplinary project team of around 20 people will be assisting him with this.

This team consists of students, water experts from various research institutes and companies which focus on analysis and metrology, such as Water Technology Centre and University of Bayreuth in Germany, EAWAG institute in Switzerland and Wetsus centre of excellence for sustainable water technology in the Netherlands.

Third swimmer
When Fath succeeds to reach the North Sea this weekend, he will be the third Rhine swimmer to complete the whole track from source to mouth.

The first swimmer to achieve this was Klaus Pechstein (Germany) in 1969. The second swimmer was Ernst Bromeis (Switserland) who completed his 1,231 km swimming marathon only a few days ago, on 19 August.