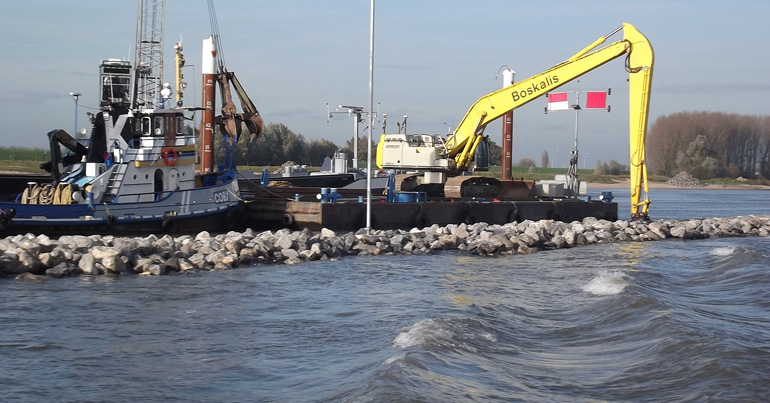 Dutch national public work authority Rijkswaterstaat officially completed the lowering of 462 groynes and the construction of a 10 km longitudinal training dam on the river Rhine.

Both water works increase the river's discharge capacity in case of extreme volumes. CEO Jan Hendrik Dronkers of Rijkswaterstaat officially inaugurated the latest Room for the River project on 23 March.

The project costed 110 million euro and will reduce the water level on the Rhine with 6 – 12 centimetres in case of an extreme discharge.

Constructors involved in the project were Van den Herik and Boskalis Nederland. Consultancy firm Arcadis was in charge of the environmental planning, contract management and technical management. 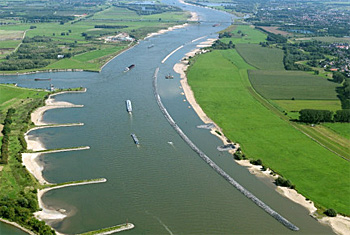 The first Dutch river training dam (right) on the inside river bend and the traditional - lowered - groynes on the outside bend.

Less incision and less flooding
In order to prevent ice masses to obstruct the river Rhine and cause flooding, many transverse dams - groynes - have been constructed in the late nineteenth century.

The groynes also sculpt the river into a uniform flow and create a deeper river bed that benefits navigation.

However the higher flow erodes the river bed and causes a continuous lowering - incision - of the river.

To counter this incision Rijkswaterstaat developed the idea to replace the transverse dams - groynes - by a longitudinal dam that still trains the river.

Soon the idea proved to have more advantages. Without the transversal groynes the river gets a higher discharge capacity and this lowers the water level in case of an extreme discharge.

The new longitudinal training dam divides the Rhine (Waal) river into two parts: a main channel (230 metres wide) for ship navigation and a side stream (90 metres) along the bank.

As a flood prevention measure 462 groynes were lowered one metre so they are less an obstacle, allowing the river to run off more freely. 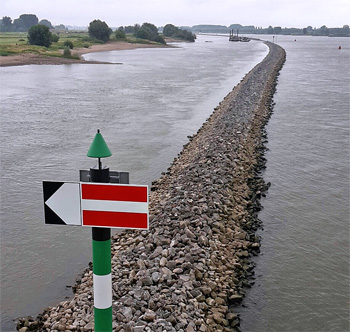 The training dam seperates the river in a main channel (right) for commercial navigation and a side stream (left) for recreational navigation.

In the side stream development of flora and fauna is expected to improve along the river banks.

Waves from the large commercial ships will no longer reach the banks, meaning the water behind the dam will become much quieter than it was, providing a peaceful ecological zone for plants and animals.

Furthermore it is expected that the main channel will require less dredging.

Without the groynes the typical turbulence near their heads will also disappear. This will stop the process of the creation of deep erosion pits close to the head and the extra sedimentation - creating shallow points - a little further downstream.

As a result there will be less need for maintenance dredging.

Three year monitoring programme
The effects of this first Dutch longitudinal river training dam will be monitored closely for the next three years.

This monitoring is part of a research project within the RiverCare programme involving three universities (Wageningen, Nijmegen and Delft) and research institute Deltares.

The results can serve as a basis to achieve improvements with long dams in other places in the river in the future. 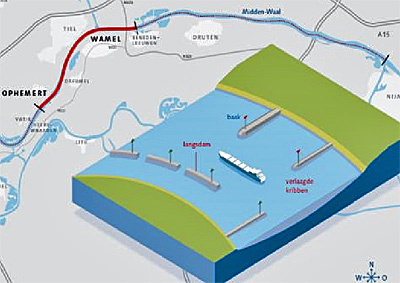 The location of the new training dam on the Lower Rhine river (Waal).

International interest
The Rhine is one of the world’s most frequented inland waterways. In the Dutch downstream part alone some 600 ships passage per day.

This economic importance makes it necessary to keep the main channel of the river deep enough for the inland navigation.

"We see this also at other important inland waterways, such as the Mississippi and the Danube", says river expert Erik Mosselman of Deltares. "These two large rivers are also trained by many groynes. On other navigational waterways, we see groynes only occasionally, to train a local situation on the river".

Mosselman notices a growing interest in training rivers for inland navigation. "We are working on studies for training the Magdalena river in Colombia and the Brahmaputra in Bangladesh".

About Room for the river programme
Room for the River is a national flood prevention programme, comprising 30 projects mainly along the river Rhine, Netherland's biggest river.

The programme has two objectives. By giving the Rhine river more room its discharge capacity will rise from 15.000 m3/s to 16.000 m3/s.

Additionally the projects will improve the spatial quality as well, making the river also economic and environmental more vital.

The programme started in 2005 and most projects are now completed. The overall budget for the flood prevention programme is 2,3 billion euro.

This news item is based on an original publication on the website of Rijkswaterstaat (Dutch only).